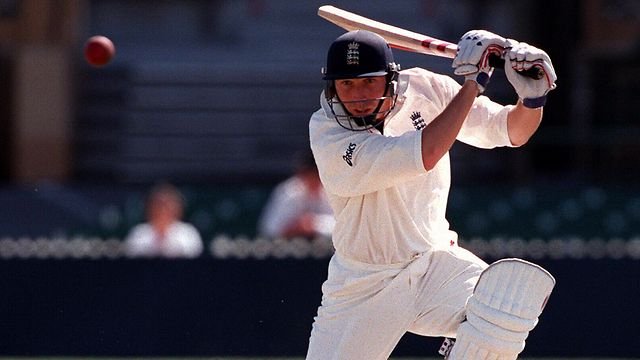 You might be feeling nostalgic about anything to do with English cricket. The only ‘good old days’ when long to return to are the Edgbaston and Trent Bridge Tests of 2005. With the Michael Atherton years, I wish to relive them, that mid-1990s period when England had a 50% failure rate in Test series. Most of them, in England, could barely watch them the first time around.

Yet, whatever Freddie or Dazzlers you try to woo me with, my heart will remain stubbornly loyal to Michael Andrew Atherton, a man defined by stubbornness. Brainy, patently talented, boyishly attractive, he offered several compelling reasons for following his career. Therefore, by extension Lancashire – before his prophesied, yet sudden, ascent to the England captaincy in the charred remains of the 1993 Ashes.

In his second Test, aged 25, he pulled off a miracle win at The Oval. Even Geoffrey Boycott might have had a crush on him that day. I had never been one for boy bands, but that last-hour, last-wicket thrill was my first experience of teen hysteria. Among the many things I loved about the baby-faced Mancunian were his crisp defensive shots, the way the bat dropped so perfectly down behind the ball like the needle on kitchen scales.

But the quality for which I really adored him was the one that drove so many to distraction mulishness, obduracy, bloody-mindedness, call it what you like; it was the quality that served as England’s spine for each of his 52 Tests as captain and another 36 after he resigned. In the opening Test of his first tour in charge, against West Indies, he showed exactly what kind of leader he would be, taking Courtney Walsh’s firebolts literally on the chin and facing down Curtly Ambrose’s death-glares with an impish grin.

That was how he inspired his team, and, whatever their performances, he did inspire them. He inspired me, too. Whether the team was having a good day or more often a bad, the little asterisk next to Atherton’s score was a joy and hope to this young innocent. He was the embodiment of St Paul’s stirring cry to the Ephesians, to “stand your ground, and after you have done everything to stand.

Whatever we had expected of the clean-cut, over-educated in génu Brearley’s psychology, Hobbs’s batting, Mrs. Beeton’s manners – it was not this, not the gritty endurance at the crease, not the stubble which like his stumps was most strongly rooted in times of the greatest peril and certainly not that ruddy dirt, the stuff in his pockets that transformed him overnight from tousle-haired cherub to bounder.

A friend recalls how I sat in the Lord’s grandstand on the day of the picket gate, proclaiming loudly that Atherton, many heroics, honorable, could not possibly have done wrong. It turned out this was not strictly true, but my trouser defense remains watertight. Yes, Atherton’s intransigence made him unpopular, but I suspect that was part of the point, with the media at least. And no, uprooting Graeme Hick from the crease on 98 in the 1994–95 Sydney Test was not his finest hour.

For many, it confirmed he was not a ‘people person. Yet for almost a decade he negotiated what must have been a difficult relationship with Alec Stewart – an awkward ghost of the era of the amateur and the professional – into a mighty opening partnership. He brought us Angus Fraser’s best years, coaxed the odd brilliant performance, and, rarer, catch out of Phil Tufnell. He accommodated and utilized Darren Gough’s ego to fuel morale. And he survived – sometimes thrived – under the autocratic regime of Ray Illingworth, which would have suffocated or crushed many.

He never gave the impression of having regrets. And boy, did he care. He was so committed to achieving his best that he repeatedly outplayed the rest of his side, some of it blessed with greater natural talent, with a bad back – an inherited rheumatic disease, ankylosing spondylitis, that caused him continual pain. The video of his 185 not out against South Africa at Port Elizabeth sits with Citizen Kane and Gone with the Wind in a grouping of worthy, laborious efforts, probably not to be watched again but the triumphant vindication of all we knew and admired of the man. He could not turn his team into a bunch of winners, but he could carry it.

In Atherton’s media career he has been notable not only for the quality and fairness of his analysis and the lack of rancor but because, unlike many players-turned-pundits, he rarely makes comparisons with ‘his day’. He would not want an apology from me or anyone for the failings of his captaincy and would be the last to blame chop-’n’-change selection, the often one-dimensional nature of the bowling at his disposal, or the frustratingly mercurial talents of his front-line batsmen.

Atherton has perfectionist tendencies, but he never gave the impression of having regrets. I suspect, if he looks back, he wonders not if he did right by the team but if he did right by choosing a career in cricket when he was capable of pretty much anything. To that, I say: yes, Atherton, you did.

Reference – EMMA JOHN is a former deputy editor of The Wisden Cricketer and Observer Sport Monthly.