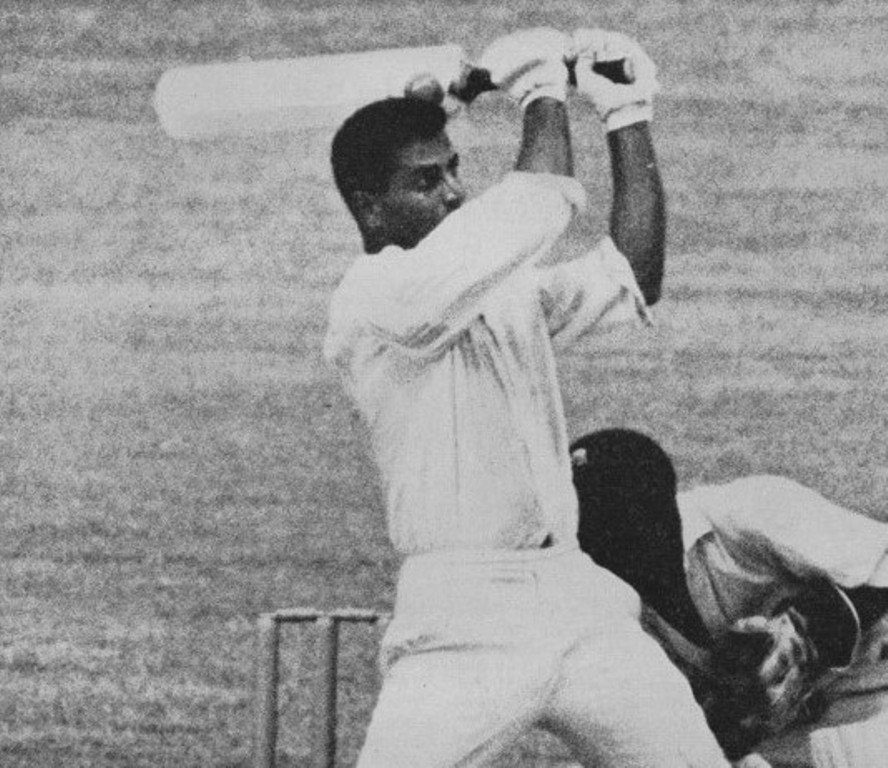 Motganhalli Laxminarsu Jaisimha was born on March 5th, 1939, in Hyderabad, India. M.L Jaisimha showed his class while at school. He assisted the mighty Marred palli Cricket Club in the local ‘A’ Division League Championship and caught the eyes of the selectors and was selected to play for the Hyderabad Combined Schools XI in the South Zone Inter-School Tournament. He was then selected to play for the South Zone in the All-India Cooch Behar Trophy Tournament. Jaisimha made his first-class debut in 1954 when he was selected to play in the Ranji Trophy Cricket Championship for Hyderabad against Andhra.

He made his appearance in a dual role of an opening batsman and bowler. He stamped his debut with a classic 90 runs and was unlucky not to have scored a ton on the first appearance and took 3 for 51. This performance was showing to herald a great future. The following year, when the New Zealanders toured India for the first time, Jaisimha was selected to play for the South Zone.

This was to be the first time when he was playing with many big names. He opened the innings for South Zone and played a decent knock with a combination of attack with confidence. For Jaisimha, the year 1958-59 will be a memorable one. He scored 374 runs, including a hundred not out against Mysore and 138 against Madras.

The great West Indians were then touring India and M.L. Jaisimha was playing for Hyderabad, scored a masterly 50 in the second innings confidently playing to Wes Hall, Sony Ramadhin, and Lance Gibbs with ease. This was to earn him a birthplace in the Indian Squad who was touring England with the Indian team which was to tour that country. Every cricketer’s dream is to tour England and make a Test debut at the historic Lord’s. He didn’t show his class on the Test debut and just manage to score 1 and 8 runs. With the accent of the Indian selectors to blood in young and promising cricketers for the future, Jaisimha made the most of the opportunities offered to him.

When he came back, he was a different player. He had more polished strokes and his temperament improved. He had learned to stay at the wicket longer. Likewise, he soon adjusted to the English wickets and climate and made a mark as a fielder in the close-in position first, and then his batting improved. He got his first Test cap when he was selected to play in the second Test at Lord’s. M.L Jaisimha scored 824 runs on his maiden tour, with 83 against T. N. Pearce’s XI as his highest score. He averaged 23·54 with the bat and captured 29 wickets.

Jaisimha has so far played in 26 official Tests and two unofficial ones against Ted Dexter’s M.C.C. team. He will long be remembered for his marathon innings of 74 in six and a half hours to save the Test match against Australia. In 1959-60 against Australia in the Final Test match at Calcutta (now Kolkata), he went on to bat at the end of the first day and remains 20 not out on the 2nd day. On the 3rd day, he started his second inning, just before the close of the day, and on the fourth day, Jai batted throughout the day by scoring just 59 runs, and eventually ended his innings on 74 on the fifth and final day. Hence, Jaisimha made a unique record of the first batsman, who batted on all five days of a Test match.

He also scored a century against the Ceylon cricket team in the second Test at Hyderabad. Jai’, to all his friends, is an all-around sportsman. He won the Junior National Tennis Tournament, which also excels at shuttle badminton and table tennis. It is not at all surprising that Jai acquired a good ball sense, having been brought up in an atmosphere of sports. His father, a great sports lover, is the patron of a club that is just adjacent to his house. The club is well-equipped with tennis courts and a badminton hall.” His sluggish batting efforts sometimes create irritations among the crowds.

Similarly, in 1960-61 against Pakistan at Kanpur, he batted throughout the day and just manage to score 54 runs. His slowest innings lasted for 505 minutes, eventually ended on 99 when he makes an effort to a quick single to complete his hundred. In 1967-68, selectors were not satisfied with his performance and did not select him for that tour.

However, due to injuries to Chandrasekhar and Chandu Border, he was right away to fly in and played the Third Test match and almost pulling off an incredible win with his 74 and 101 runs. In 1970-71, M.L. Jaisimha was last seen to play for India on the tour of West Indies at Port of Spain, where he stayed at the wicket for an hour and manage to score 23 runs helping Sunil Gavaskar to save the match for India.

He was an accomplished batsman, who opens the batting for India, but does not really relish that position. A forceful batsman who is very pleasing to watch and is not afraid to leave the crease to drive, he is a great crowd pleaser and is a big draw along with Pataudi. His eye is keen and feet nimble; he plays his shots with plenty of time to spare and gets behind the ball that much earlier.

As a medium pace bowler, he swings the ball both ways. When the shine is off, he bowls off-spinners with relish. Throws accurately while fielding in the country, but prefers to field close. When in the West Indies he formed a great combination with Surti, Nawab of Pataudi, and Borde on the offside.

Many critics said that this was the best fielding side ever to visit the Islands.” Jai loves western music, jazz, and calypso, the tunes he applies to his batting are in abundance. He reads a lot, mostly fiction and crime. He spends some time on the billiards table and needless to say, he is good even at that”.

He had performed the duty of Indian Selectors in 1977-78 till 1980-81. Due to his excellent accomplishments, MCC made him a life member in 1978. Jaisimha’s voice often listens to the TV commentator and did valuable commentary in the 1987 cricket world cup. He suffered lung cancer and died on 6th July 1999 at the age of 60 at Sainikpuri, Secunderabad Telangana, India. His sons Vivek Jaisimha and Vidyut Jaisimha were Indian first-class cricketers and did not play for India. Nawab Mansoor Ali Khan Pataudi often played his captaincy for Hyderabad in 16 seasons and 76 matches.

Mr Devotor - November 17, 2021
0
Saeed Anwar sends another one on the way to the boundary during his record-breaking innings of 194 at the Golden Jubilee Independence Cup tournament...