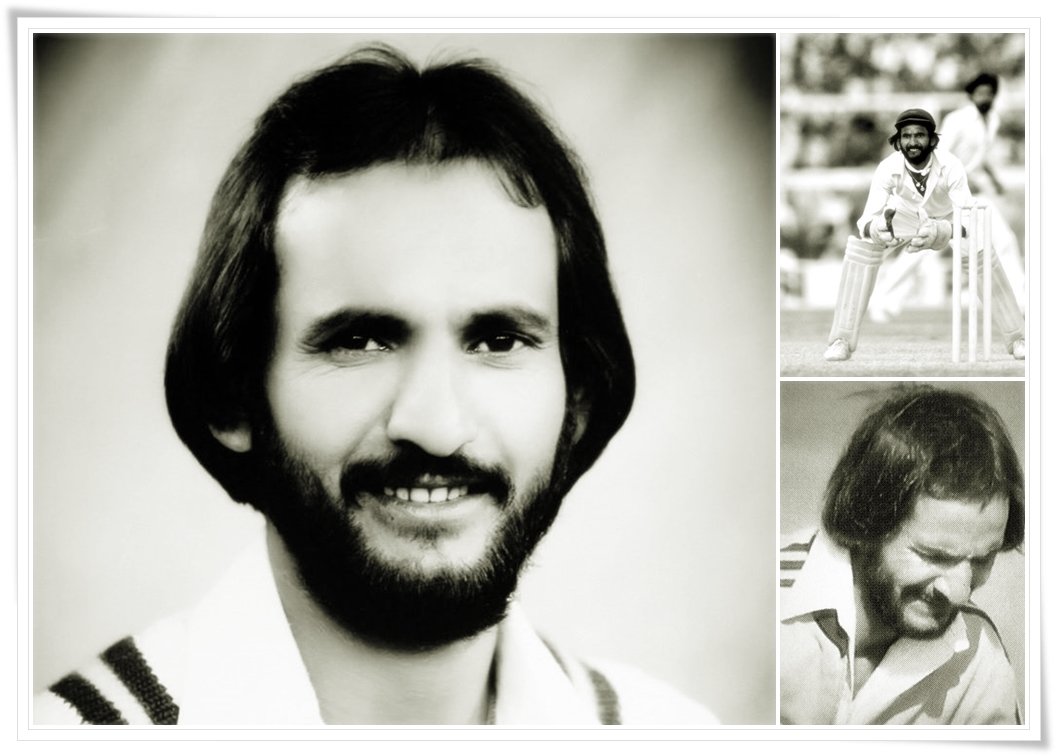 Former Pakistan wicket-keeper/batsman Taslim Arif died in Karachi on the night of March 13, 2008, about two months short of his 54th birthday. In his short international cricket career for Pakistan, he proved himself to be a mighty character with true grit, a quality he continued to display in whatever he did after his playing days were over, until his dying day Taslim literally died with his boots on. Just days ago, he was doing the running commentary of matches in the 2007-08 Pentangular Cup cricket championship for GEO Super.

In addition, while he continued to serve cricket in any capacity he could, he was helping run a cricket academy and being a constantly familiar face on the country’s cricket circuit. He had been diagnosed with a lung infection lately, his chain-smoking habit leading to his early death. He had been hospitalized several times for respiratory problems. On the 13th of March, 2008 it was eventually all over.

The right-handed Taslim Arif played in six Test matches and two One-day Internationals for Pakistan all within the year 1980 when the national selectors, disillusioned with regular wicket-keeper Wasim Bari’s dwindling form, had decided to try someone new. Taslim, in fact, came in as a specialist batsman in the Pakistan Test match line-up, to initially play instead of Zaheer Abbas on the tour of India in 1979-80 when the star batsman was experiencing the worst slump of his career.

Taslim opened the batting with Sadiq Mohammad in the sixth and final Test match of the series against India, at Calcutta (now Kolkata) on January 29, 1980. He immediately made a big impact in the drawn encounter (Pakistan had already lost the rubber 2-0) with scores of 90 and 46 in the two innings while the left-handed Sadiq Muhammad was dismissed for low contributions of 5 and 8.

Taslim top-scored in either inning – Javed Miandad though also made 46 in the second innings, His 90 in the first came off 268 balls in seven hours four minutes of batting with four boundaries. His 46 took 92 balls in two and a half hours with four fours. Impressed with his Test debut performance, the selectors decided to sideline Wasim Bari for the 1979-80 home series against Australia – which began a little over three weeks later-and play Taslim Arif both as an opening batsman and wicket-keeper.

In the first Test at Karachi, which Pakistan won by seven wickets-they later also took the three-match rubber by a 1-0 margin Taslim had Haroon Rasheed his opening partner. He himself scored 58 and 8 in addition to making two catches and two stumping behind the wicket. Then, Taslim had the biggest six days of his short international career. 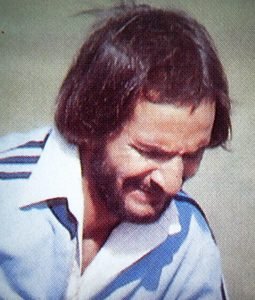 In the second Test match in Faisalabad, played from March 6 to 11, 1980, Taslim Arif earned the distinction of being on the field of play for the entire duration of the match. This amounted to 20 hours and 8 minutes on the four playing days- interrupted, of course, by some bad weather as the first day was totally washed out. He kept wicket for 773 minutes (211 over’s) as Australia piled up a first-innings total of 617- Taslim made only one catch though. Then, in Pakistan’s reply of 382 for two in 435 minutes (126 over’s) before the Test ended in a tame draw, Taslim scored an unbeaten 210. Following an 87-runs start with Haroon (21), he batted for a total of seven and a quarter hours, faced 379 deliveries, and hit 20 fours.

His second-wicket stand with Zaheer Abbas (19) was worth 72 runs and the unbroken partnership for the third wicket with skipper Javed Miandad (106 not out) another 223 runs. Taslim played in all three Tests against Australia. In the third match at Lahore, with the game nearing an inevitable draw, Taslim came on to bowl his right-arm medium-pace Javed Miandad kept wicket and dismissed Graeme Beard (caught by substitute Sultan Rana for 49) to return bowling figures of 5-0-28-1.

He was retained for the four-Test home series against West Indies as opening batsman and wicket-keeper. In the second innings of the drawn first Test at Lahore, he retired hurt after being hit on the hand by fast bowler Sylvester Clarke. He played in the second match at Faisalabad, being dismissed Ibw to Clarke for a third-ball duck, and kept wicket poorly as Pakistan was beaten by the West Indies by 156 runs.

It later transpired that he had been playing the Test with a compound fracture in a finger. That was the end of Taslim’s international career. Wasim Bari returned to the Pakistan team in the third match of the 1980-81 rubber and went on to play in 25 of the country’s next 28 Tests before announcing his retirement in 1983-84.

Taslim Arif scored 501 runs in his six Tests at an average of 62.62 with one hundred and two half-centuries. He took 9 dismissals (6 ct, 3 st) as wicket-keeper and had figures of 1-28 as bowler In his two One-day Internationals, both played against West Indies in 1980-81, his total was 28 runs (average 14.00) with a highest of 24 in addition to a catch and a stumping.

Taslim Arif was born on May 1, 1954, in Karachi’s PIB Colony – and having started his playing career with Malir Gymkhana. Taslim was just 13 years 263 days old when he made his first-class debut, for Karachi Blues in an Ayub Trophy Championship match in 1967-68. 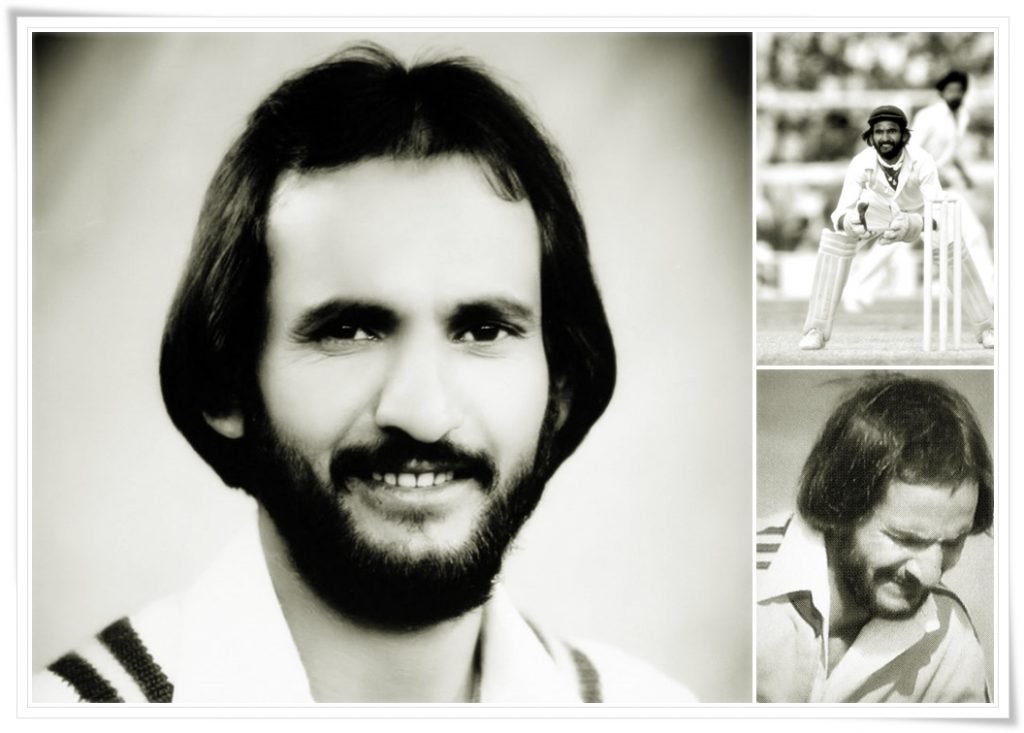 He played for World XI in Australia. In the mid-1970s, he was a member of the Daisy Hill CC in England’s Bolton League and the professional signing at Lowerhouse in the Lancashire League and, in 1995-96, represented Pakistan Masters in a four-nation Masters Cup tournament in Sharjah.

The World Series Cricket (WSC) Cavaliers and the When Taslim made his 210 not out, he broke the record of his own country-man Imtiaz Ahmed (209 v New Zealand at Lahore 1955-56) for the highest score in a Test match by a wicket-keeper. Of course, his mark has been surpassed twice since then by Zimbabwe’s Andy Flower 232 not out v India at Nagpur.

In 1974-75, Taslim dismissed 41 batsmen 35 of, 6 st) in 14 first-class matches to create the then-new record for wicket keepers in a Pakistan domestic. However, in 1978-79, in a BCCP Invitation tournament match for National Bank against Punjab at the Aitchison College Ground in Lahore, he became the first Pakistan wicket-keeper to take 10 dismissals in a first-class match.

He held six catches and made four stumping. Two of Taslim Arif nephews who have played a considerable amount of first-class Wasim Arif (1982-2000) were a wicket-keeper like him who played for Karachi, HBFC, and National Bank. However, Mohammad Ali (1993-200) is a left-arm fast-medium bowler, who has appeared for Railways, Lahore City, United Bank, Islamabad, ADBP, Rawalpindi, and Bahawalpur and, after having become a British citizen, for Wales Minor Counties, Derbyshire and Middlesex in addition to the second eleven crickets for several other Engish Counties.

Taslim’s son Ainan Arif, an opening on the middle-order right-hand batsman and the useful off-break bowler has been playing regular cricket for various Karachi teams-including under-19 outfits for three seasons. He also captained the Karachi Harbour under-19s in 2007-08 and in 1999. Taslim Arif featured in the revival of the Asif Iqbal Coaching Academy in Karachi.

Later, he joined hands with off-spinner Tauseef Ahmed in running another academy in Karachi. In 1999-00, he was the coach of the Pakistan team in the Under-17s Asia Cup competition. He also served as a batting consultant with NBP and a cricket selector for Karachi,

Taslim Arif later became well known as a radio and television cricket commentator. He had also served as match referee in 40 first-class matches since 1996, in addition to having performed similar duties in 25 major limited-over matches since 2001, eight Twenty20 matches (2005-06), and four Youth One-day Internationals from 2003 to 2006.

Taslim Arif Abbasi has left behind his wife, two sons, and a daughter to mourn his death. He also had three daughters from an earlier marriage, to an Australian national. Former colleague Javed Miandad said on Arif’s death was a tragedy. “We all loved him, he endeared himself to everyone he played with. H is a great loss because he was there for all whenever needed,” said Miandad, who was Arif’s captain when he made the double century.

His colleague Iqbal Qasim said “Arif was a very kind, happy-go-lucky son of character and we enjoyed each other’s company. His death has saddened The Pakistan Cricket Board offered its condolences to Arif’s family. “With Arif’s death, we have lost a good cricketer and a great cricketing mind.

We console Arif’s family and share their grief it said in a statement. Moreover, his compensation announced for Taslim’s family by the National Bank of Pakistan (NBP) has announced financial assistance of 1.2 million rupees for the widow of the late Taslim Arif, the former Pakistan Test wicketkeeper, and the induction of his two sons in the bank’s service.

The announcement was made by NPB Chief Syed Ali Raza at a condolence meeting held for the late Taslim Arif under the auspices of the bank’s sports department.

While eulogizing the services and contribution to the late Taslim for Pakistan and NBP in cricket, Syed Al Raza described him as a great human being and a lively character. The former wicket-keeper/opening batsman Taslim Arif died on Merch 13 due to lung infection has never seen such outpouring of grief for Taslim Arif. The presence of a large number of his fans at this meeting here and at his funeral was a great tribute and compliment of the fate Taslim,” Syed All Raza said.

Speaking on the occasion former Pakistan captain and wicket-keeper Wasim Bari said that in spite of Taslim being his adversary and competitor behind the stumps, he always respected him. He declared him an outstanding cricketer both as batsman and wicket-keeper.

Taslim’s elder brother Naseem Arif in his vote of thanks said he and his family got a lot of strength and support in this hour of grief and difficult time and particularly thanked the NBP management for their assistance for the grieved family.