Abey Kuruvilla is a 6ft 6in tall fast bowler who was born on 8 August 1968. He is a former Indian pace bowler of the mid-1990s. Abey Kuruvilla’s notable thing was his height and broad frame. He grew up in Mumbai lead the pace attack on the tour of the West Indies in 1997. He made his Test debut against West Indies at Kingston, Jamaica in 1997. Javagal Srinath wasn’t available on this tour due to a rotator cuff injury.

On the flat pitches, he could not get big success. Although he bowled decently in the Test matches he was dropped from the team. In the Third Test at Bridge Town, he picked up 5 for 63 his maiden and only five wickets haul in the second innings to set up a winning position for India. But Indian batsmen contrived to throw it away. Abey Kuruvilla bowled with diligence and devotion for his exemplary control and ability to work out the batsman.

He also had an excellent-disguised off-cutter up his sleeve. Bombay has a strong bowling lineup in that period when Kuruvilla played along with Paras Mhambrey, Nilesh Kulkarni, Salil Ankola, and Ajit Agarkar. Abey Kuruvilla also represented India in ODI’s. One of his best bowling came against Sri Lanka at Colombo (SSC) in 1997 when he picked up Wickets. India though lost the match.

His another memorable man of the match performance against West Indies at Queen’s Park Oval, Port of Spain, where he bowled superbly and took 3 for 23. In a one-day match Pakistan vs India at Madras in 1997, when Saeed Anwar rolled Indian bowler in his famous 194 innings. Abey Kuruvilla was part of a bowling attack, and he really bowled well against Saeed Anwar, which were unstoppable in this match.

Abey Kuruvilla emerged as a key figure in the Indian attack in the following season where he did creditably consider the flat shirtfronts on offer but, surprisingly, he was never considered again.  In April 2000, he decides to call it day by announcing his retirement from all forms of cricket. He thought, a lot of young talent coming up, and I have to make room for them. After retiring from cricket he has taken up a coaching career and on 27 September 2012, he was appointed as the national selector from the BCCI.

Kuruvilla was so unlucky selected too late for the national team. He was the tallest player to play for India in spite of his well-endowed physique. Though he was not expressing his thriving swing and disguised slower delivery made him a very special bowler. In 1991-92, he took 35 wickets in his first full season for Bombay. And he was widely expected to make the tour of South Africa in 1992-93, but unfortunately was overlooked. 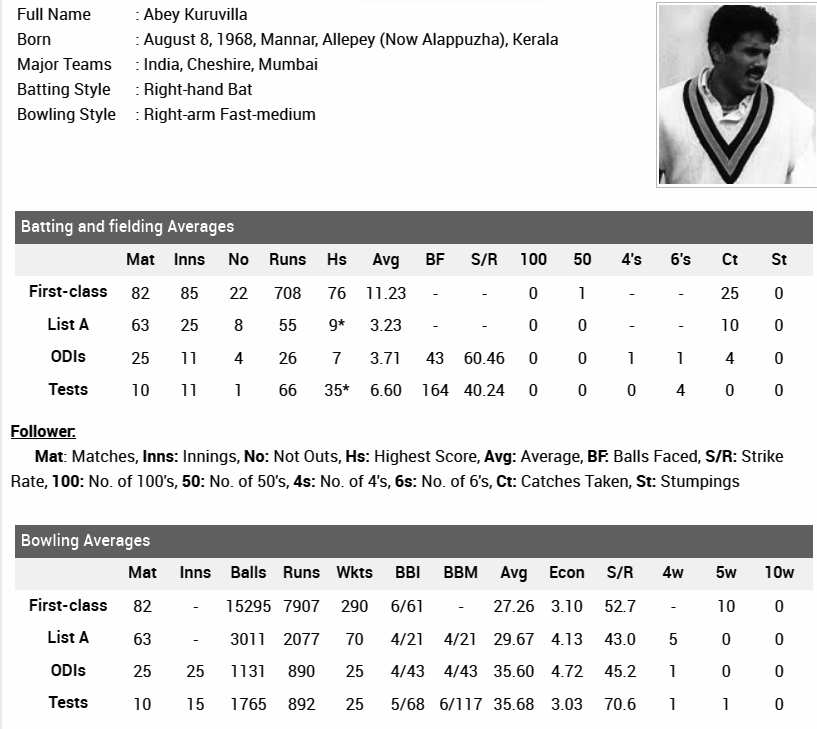 Malcom Marshall – Most Persuasively of all Windies Peers