In the 1970’s Talat Ali Malik was one of the most sought after players for an opening batsman role in Test matches. He did appear in 10 Test matches for the country and unfortunately never played a one day international for Pakistan. But they were spread over seven seasons, he was at times plagued by injury problems and poor form and eventually only had a modest career record.

From 1972-73 to 1978-79, his contribution in 10 Tests, in which he just managed to score 370 runs at a meager average of 23.12 with a highest of 61, while he made two half-centuries. Talat Ali held four catches as a fieldsman and had bowling figures of 0-7. His Test career off to a traumatic start, facing brisk pace of Denis Lillee on Test debut, and he fractured his thumb by an uplifting delivery of Lillee. 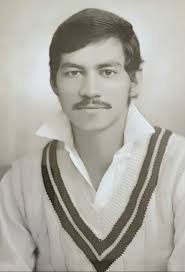 Talat Ali was born in Lahore on May 29, 1950. He was a right-hand opening batsman, occasional right-arm medium bowler, and a useful close-in fielder. He played his first-class cricket from 1967-68 to 1978- 79 for Lahore, Punjab University, HBL, and Pakistan International Airlines (PIA).

After a splendid season at home in 1970-71, when he totaled 887 runs (average 55.43) in 10 first-class matches with five centuries, he was chosen for the 1971 Pakistan tour of England. However, he didn’t play in any Tests there. On the 1972-73 tour of Australia and New Zealand, he made his Test debut and then appeared in all three Tests against England at home later the same season.

After a considerable absence, Talat Ali returned for Pakistan’s tour of England in 1978 and then accompanied the team to Australia and New Zealand in 1978-79, playing Test matches in all three countries. Then, he said goodbye to first-class cricket, deciding to concentrate on his job with PIA at the age of 29.

For several years, he was posted in the sales office in Manchester, England, taking time off to serve as an International Cricket Council (ICC) Match Referee from 1997 to 2001. He performed this duty in 10 Test matches in West Indies, Sri Lanka, and England and was match referee in 26 One-day Internationals in West Indies, Sharjah, New Zealand, England (including World Cup 1999) and South Africa.

The same season, he was a member of the Pakistan Under-25s team that toured Sri Lanka. His highest score of 258 was achieved for PIA against Rawalpindi at the Pindi Club Ground in a BCCP Patron’s Trophy Championship match in 1975-76. He also served as an ICC match referee. See Talat Ali’s career at Cricinfo.

Mr Devotor - March 28, 2020
0
Zimbabwe now holds a good reputation at the International level. The players are getting world-class recognition with the progress of the game. Grant Flower...

Ajit Wadekar – The Man Led India to First Ever Series...