Home Teams Pakistan Aftab Baloch – Twinkled a While and Fading Away 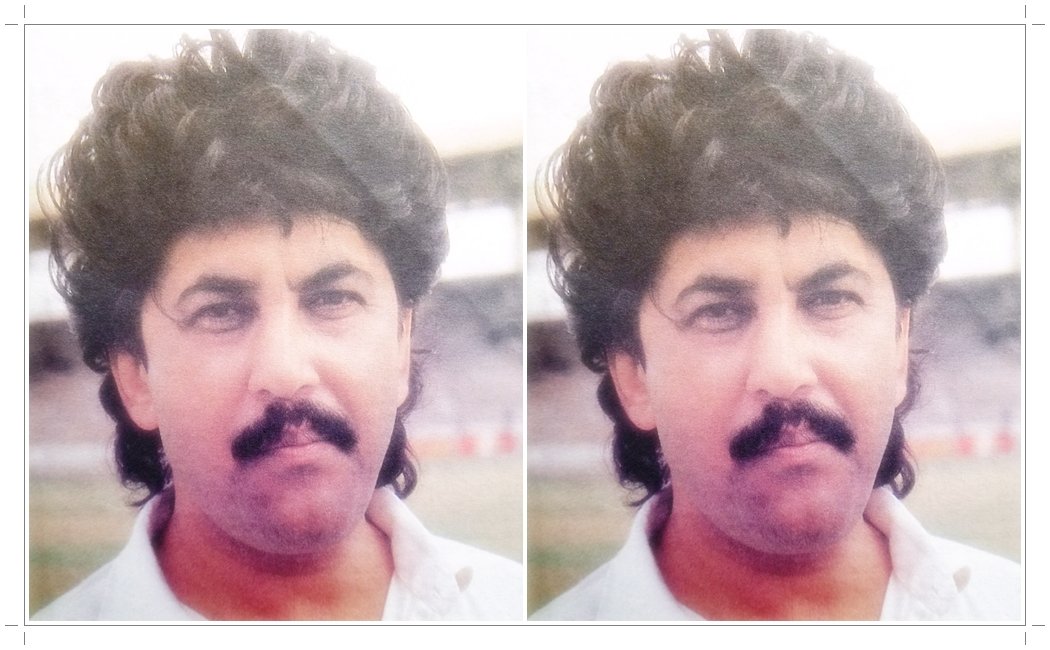 Aftab Baloch is a perplexing name for cricket fans. Some are familiar with his recognition as a former Pakistan Test cricketer. However, may have missed him just because he flashed on the international arena for a while, twinkled for split seconds before fading away in the grasp of Time.

Not that he did not merit absolute regularity amongst the Test outfits but for some other reasons he has subjected a harsh criticism before he was thrown to the wilderness. He was a magnificent batsman who had a natural flair, a vast repertoire of strokes, including elegant drives and that hitting off-spinning ability. He had to endure prolonged periods of isolation between his two Tests.

Aftab was a natural ballplayer with power off and cover drives a slightly open stance and the perfect feet movement which could effectively negotiate the spinners and the fast bowlers with equal ease. His fault was not purely cricketing negligence but he fell on the wrong side of the administrators and was not destined to represent Pakistan on regular basis.

At the age of 16, he started to face first-class music and did it in style. Aftab Baloch became an instant hit as a schoolboy cricketer who was an elegant batsman, a nagging bowler, and a whirlwind of a fielder in the cover region. Cricket was his natural instinct as his father M.S Baloch has been a class act and was a Ranji Trophy regular. He also represents Sindh and Karachi XI’s. So the all-around ability was presumably a genetic predisposition.

Aftab Baloch’s career was set in a different mold. He made his debut for Public Works Department (PWD) in 1969-70 and had the distinction to fulfill all his obligations.  Inspiring his captain the Test ace Saeed Ahmed. PWD played the first match against Hyderabad Blues at Karachi National Stadium for the Quaid-e-Azam Trophy and immediately the debutante was in action.

His team was tottering at 290 for 8 and he entered the field at number nine. On the other end was another left-handed all-rounder Arshad Bashir and both combined their confidence and cricketing conviction to the extent that the score reached 452 for 8. Aftab remained unbeaten on 77 and Bashir on the undefeated 88 when Saeed Ahmed declared the innings.

There was more for Aftab as the tourists were dismissed for 95 and 124 in the two completed innings. His nagging off-spin bowling with a high, swinging arm, wide off the crease fetched his figures of 6 for 33 and 6 for 46. Indeed It was an unbelievable debut. Aftab was amazingly declared as the best prospect around in Pakistan at that particular juncture.

Two more weeks passed and Aftab was turning into an uncrowned her. At Quetta, against Kalat, the off-spinning all-rounder managed to hit an unconquered 100 aiding his team to pile a massive 524 for 4 declared, and then he claimed 4 for 26 as PWD won by an innings and 296 runs.

At the same venue, against Quetta PWD reached an astonishing 714, and Aftab’s share was a belligerent 104. His team ran through the game with an innings and 320 runs. In the Quarter Finals against the Railways, PWD won the game on a first-innings lead. But Aftab failed to produce his magical form. Now it was time for Aftab to travel to Lahore to play the semi-final and it was staged at the picturesque Baghe-e-Jinnah where the wicket was predictable and relatively docile.

The opposition was Sargodha and Aftab dominated the scene with a captivating 120 runs. And then support it with a well-executed 51 not out in the second innings. And when his turn came to roll the arm over, he produced a spell to claim 3 for 31. PWD achieved 193 runs and went on to play the Final. Thought, PIA won the title that year but Aftab had established himself on the national scene.

The same year, the England Schoolboy XI toured Pakistan. Here Aftab was there to represent the U-19 XI. It was his first exposure to international cricket and the Pakistan blazer. Excited and full of the promise he was destined for loftier heights. New Zealand came to Pakistan for a three-Test Series and the inaugural match was played at Rawalpindi against President XI.

Aftab Baloch was brought in and he replied with a stylish 37 besides bowling on the line and was seen diving while he saved certain hits to the fence. Aftab was promptly named on the team for the third Test at Dacca. He was becoming the youngest Test cricketer at the age of 16 years and 221 days after Mushtaq Muhammad. Aftab made a decent 25 runs and fielded above the expectations but was not considered for future Pakistan assignments.

Being sent in the wilderness in 1969-70 seasons. He was playing in the Ayub Trophy and hit 59 and 75 in PWD’s two games before the team made an exit in the round-robin tournament. In 9 games during his debut season, he amassed 686 runs at the healthy average of 76.22 and claimed 28 wickets at just 18.57 besides managing to hold on to 10 catches. It was the simply outstanding performance of Aftab Baloch.

And now, the talented all-rounder was being politicized and inevitably it seemed. Aftab Baloch accepted an offer to play for Pakistan International (PIA) during the 1970-71 seasons. He joined the senior outfit to play in the BCCP Trophy. PIA that year was already overflowing with the celebrated Test cricketers and few opportunities were nudged towards him. To his horror, Aftab was excluded from the semi-final team and was thrown in unwanted isolation.

Just Aftab Baloch launched himself for the PIA outfit. He appeared once more in the Pakistan XI against Stewart’s Commonwealth team being dismissed for 6 and 0. He was not included in the PIA team for the BCCP Trophy Final. This performance forced the selectors to neglect him for the 1971 England tour and harder times were waiting for him due to behind-the-line intrigues.

The 1971-72 winters brought no better hopes and the sordid tale of his exclusion from the mainstream continued. Frustrated, Aftab Baloch decided to respond to the PIA administration and appeared for Karachi in the BCCP Trophy. Though Karachi Blues made it to the finals and Aftab played all the matches. But this time around, his own form deceived his cricketing trust and rolled on the line for mediocrity.

The selectors were not changing their stance and justified in their intents, they ignored Aftab for the scheduled tour to Sri Lanka. Then they did not consider him for the twin tour of Australia and New Zealand in 1971-72. Aftab Baloch was in shambles and required recollecting himself self and he began the campaign, inspiring himself and living for another hour and another day. He was named to captain the Karachi Blues team for the Patron’s Trophy.

He started the tournament by hitting a pleasant 96 in his first innings of the winter and then reclaimed his bowling prowess by dismissing 5 batsmen for 70 runs in the tournament’s final against the Railway to lead from the front.

At 19, he had led Karachi Blues to their first major title and this showed his confidence imperative and certainly an asset for the future, but it was not to be. During the Quaid-e-Azam Trophy, he appeared for Sindh, and though Railways won the national championship. Aftab bowled magnificently to collect 8 for 171 in a marathon spell of 62.4 over’s. Back from Australia and New Zealand, Majid Khan and Mushtaq Muhammad announced their unavailability on personal reasons for the 1973-74 season and this ended Aftab’s exile.

A Word XI was invited to play games for Prime Minister’s Flood Relief Fund. In 2 matches he notched up 119 runs and out of four outings. He remained unbeaten thrice, though as a bowler he couldn’t impress the purists. Immediately after participating in the international matches at home, he found himself traveling to Sri Lanka with the Pakistan Under-25s. At Colombo, he went in at number four and played an innings of a lifetime. He hit an accomplished 167* in the first innings and then saw his captain Wasim Raja claiming 14 wickets to seal the fate of the match.

Then Aftab was named on the Pakistan team for both the international at home against Sri Lanka. In the same season hitting 31 and 94 at Lahore. While captaining Sindh in the 1973-74 seasons, against Balochistan, in the Quaid-e-Azam Trophy he hit 25 fours on his way to a memorable 428, coming in 9 hours and 44 minutes. It was the second 400 or more score in the history of Pakistan’s First Class Cricket.

But as the season terminated, he had the ignominy of registering a pair against PIA while representing the National Bank of Pakistan (NBP). Overall, Aftab Baloch gathered 1,205 runs at 52.39 in the season and was second to Zaheer Abbas. Who had an aggregate of 1,597? But with the ball, he was quite expensive with 19 wickets collected at 44.96.

His performance softened the selector’s attitude as Aftab Baloch was named on the Pakistan team to tour England in 1974. Astonishingly Aftab was considered as a reserve wicketkeeper to Wasim Bari. The 1974 tour was a wet tour and Aftab remained on the sidelines having had mediocre performances with the bat. He was Pakistan’s 12th man in all the 3 Tests and returned home desperate to run into action.

During 1974-75 seasons, Aftab was once again at his best and crossed the 1000 runs distinction in the season. Thus becoming the first-ever Pakistan player to achieve the feat, twice in two years. And the Balochistan team was again on the receiving end as he hit them with bemused disdain gathering an unconquered 200.

Earlier in the season, he had led the National Bank against Railways to Partorn’s Trophy Title at Lahore. He did excellent batting and in doing so scored a magnificent 100. And now he was bowling better than ever before, claiming 28 wickets at 10.00. Then in 1974-75, Aftab led National Bank to win the A.S.Pirzada Tournament. Finally, he won his Test place against the West Indies at Lahore. Aftab hit the fast bowlers with timing and courage to manipulate 60 not-out runs. However, surprisingly he was dropped for the Karachi Test, thus bringing an end to his career.

It was alleged that he was scared of the hostile bowlers and lacked the temperament to face the West Indians. He was condemned without anybody offering evidence against the charges. He was written off as a Test batsman. However, more than politics was sensed in Aftab’s unceremonious exit from the Pakistan side.

He was standing by when Pakistan made a short tour to Sri Lanka in 1975-76. But he earned more honors for the National Bank winning them the Patron’s Trophy again beside their first-ever national title by getting them the Quaid-e-Azam Trophy. The BCCP League was lost to PIA by a margin of four points.

National Bank’s captaincy went to Wasim Raja later the same season. Not because Aftab was stripped of the title, but because under the department rules. The captaincy had to change hands in the rotation, an unusual phenomenon. Surprisingly Aftab joined PIA again during the 1976-77 seasons and captained them in Wasim Bari’s absence. In the end, his promise as an all-rounder faded out and his career remained a table of sheer injustice. He died at the age of 68 on January 24, 2021.

The First Decade of Pakistan Cricket