Pakistan opening batsman Alimuddin was born on December 15, 1930, Ajmer, Rajasthan, India. Alimuddin was almost a permanent member of the Pakistan Test cricket teams of the country’s early days. Yet he was not a part of its first official tour to India in 1952-53. A youthful 17-year-old Hanif Muhammad was then being partnered by the temperamental Nazar Muhammad as one of the outfit’s opening batsmen.

An arm injury put an end to Nazar’s international career within one year of that tour to India and in walked Alimuddin just to ease into the opening made.  He was a burly opening batsman who preferred attack to defense and an excellent fielder. Of Pakistan’s next 36 Test matches, Alimuddin went on to play in 2 over an eight-year period. He scored just over a thousand runs, which was quite credible as in those days of tricky and uncovered pitches; most batsmen really couldn’t muster up big scores.

A stocky right-handed opening batsman always ready to play his strokes, and a magnificent fielder, Alimuddin was thus amongst the earliest prominent Pakistani cricketers. He represented Rajputana in the semi-final of Ranji Trophy competition in 1942-43 and was a mere 12 years 73 days old in that match against Baroda in the latter’s territory.

He has been confirmed as the youngest player in all history to have appeared in a first-class match. Some unconfirmed reports say that an Indian Ismail Baporia, was just 11 years or so old when he did so in the late 1950s, but not all statisticians have yet agreed to this fact.

Alimuddin hit 85 for Pakistan against Ceylon (now Sri Lanka) at Karachi in 1949-50 and toured England with the Pakistan Eaglets in 1953. In England with the first Pakistan Test team in 1954, he started in tremendous form, scoring 142 at Worcester and 51 and 100 not out against Cambridge University at Fenner’s in the opening matches, and although he failed in the Tests, he made 1,083 runs average 30.94 on the tour. 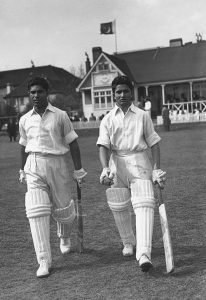 In the West Indies, he failed to find his best form but, after losing his place, he came back with 50, 109, and 53 in successive innings against England at Dacca and Karachi in 1961-62. On his second Test tour of England in 1962. His only notable achievement was in the third Test at Headingley Leeds.

When he scored 50 and 60 out of totals of 131 and 180 respectively. Alimuddin became a victim of that 1962 tour, where Pakistan lost four of the five Tests and found himself excluded by the time and country resumed playing Test matches in 1964-65.

For the next few years, Alimuddin captained various Karachi teams and for a while,e he became Pakistan national cricket coach. Taking up a career for Pakistan International Airlines in London, where he has lived for some three decades he never misses a Test at Lord’s. His only test wicket was Former West Indian all-rounder Collie Smith.

Alimuddin played 25 Test matches for Pakistan during his career and scored 1,091 runs at an average of 25.37. He made two centuries and seven fifties. Cricket critics believed that he possessed a sound technique. In Test matches, he has established an effective opening partnership with Hanif Muhammad.

At the age of 72, he had suffered a heart attack. Alimuddin looks sturdy and strong as ever although his big mop of hair has turned all white. His first-class career about a quarter of a century from 1942-43 to 1967-68. He played for various teams like Rajputana, Gujrat, Muslims, Sindh, Bahawalpur, Karachi, and Pakistan PWD.

In 140 matches he scored 7,275 runs at an average of 32.77 with his highest score was 142 against Worcestershire in 1954 remains his best effort. He hit 14 hundred, held 65 catches, and captured 40 wickets with his occasional leg-spin at 23.97 runs apiece. His best innings figures were four wickets for 38 runs. Alimuddin died on July 12, 2012, at Northwick Park Hospital, Harrow (aged 81 years 210 days). Alimuddin suffered from heart and lung diseases also had kidney failure and were on dialysis.

Mr Devotor - April 5, 2022
1
Inzamam-ul-Haq is a great batsman not only in Pakistan but also in the world of cricket. The history of cricket is incomplete without a...

The First Decade of Pakistan Cricket