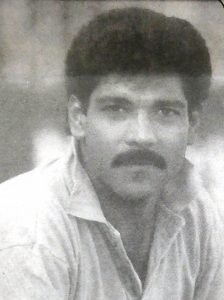 He has apparently been named to lead Lahore’s junior string so as to guide the young talent at his command through the Championship, keeping in view his experience at this level. Aamer Malik is one of three players in the world who have scored a century in both innings of the first-class debut. The other two players are Nari Contractor and Arthur Morris.

But it took him another eight years to break into the Pakistan team. He appeared in a total of 14 Tests. In his first match, he held four catches in an innings as a fielder, against Eng- land at Faisalabad in 1987-88. In the next Test, at Karachi, he scored an unbeaten 98 batting at number six. For two seasons, Aamer served as Pakistan’s opening batsman.

Against India, he made 117 and 113, in successive Tests at Faisalabad and Lahore, respectively, in 1989-90. But in six subsequent innings, he managed only a further 26 runs and was dropped, discarded, and forgotten. He was recalled in 1994-95 when Pakistan played against Australia at Rawalpindi.

Aamer contributed scores of 11 and 65, batting at number five, but he has dropped again and never returned to the Pakistan team. He totaled 565 runs (average 35.31) in his 14 Tests and scored two centuries. He held 15 catches (three of them as wicketkeepers) and made one stumping. His one wicket as bowler cost him 89 runs.

In 24 One-day Internationals over the period of time 1988 till 1994, Aamer Malik scored 556 runs at an average of 25.27. His highest at this level was 90 against Australia at Perth in 1988-89. Although he was also used as a bowler in the one-dayers, taking three wickets for 86 runs. Moreover, he kept wicket in as many as 15 matches, effecting 10 catches and three stampings. He held three further catches in the field. 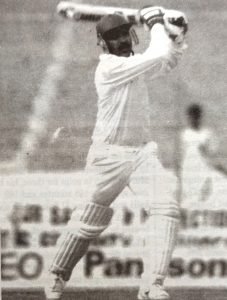 Aamer Malik has represented Lahore, ADBP, Railways, and PLA in Pakistan’s domestic cricket. He was a widely traveled cricketer and has played professional club cricket in England, Scotland, and Bangladesh.

The almost forgotten Aamer Malik was fished out of the moth-balls and installed as captain of the Lahore Whites team for the 2002-03 Quaid-e-Azam Trophy Grade-I Cricket Championship. Aamer has played no significant cricket over the last two seasons.

However, he worked for Pakistan International Airlines (PIA) for whom he has also played cricket for some seasons. He was even one of the selectors appointed by the Pakistan Cricket Board (PCB) to pick the Rest of Punjab team for the Quaid-e-Azam Trophy Grade-I tournament.

He has been an active cricketer for as many as two decades. Lahore Blues will be defending the title they won 2001 season, and they enter the fray as the city/district’s senior outfit. Pakistan cricketer Saleem Elahi, not needed by the national side in that season, has been appointed to lead the Blues.

Included in the Lahore Blues team are players like Bazid Khan, their vice-captain, Imran Farhat, Humayun Farhat, Mohammad Hussain, and Irfan Fazil, the last four all having played in Tests as well as One-day Internationals for Pakistan.

Aamer Malik’s Whites team includes only one other national player, in Shahid Anwar. However, it also has promising youthful talent in the persons of wicket-keepers Kamran Akmal and Zulqarnain Haider, in addition to Kashif Siddiq, Intikhab Alam, Adnan Naeem, and Fahad Masood.

Aamer Malik had started his first-class career with a bang in 1979-80, scoring 132 not out and 110 in his debut match, for Lahore A against Railways at Lahore.

Also, Read – Aamer Nazir – Came Like a Bolt From the Blue – Then He Was Gone

Mr Devotor - March 18, 2022
0
Can anyone be as ubiquitous as Curtly Ambrose? Over the decade of nonstop cricket had failed to change him. He was miserly as he...