The last Test of Ind vs WI First Test 1958-59 at Delhi was an exciting affair. India, after scoring 415 in the first innings, conceded a lead of 229 to the West Indies who declared their innings at 644 for eight wickets.

On the last day, after being 243 for three at one stage, India was in danger of defeat but managed to save the game. Manjrekar and Umrigar were on the injured list. Chandu Borde, indifferent form throughout the series, cracked a century in the first innings and came very near to scoring another in the second innings.

At the fall of the eighth wicket (Desai), the West Indies fielders were seen rushing back to the pavilion. But Hemu Adhikari, India’s fourth skipper during the series asked them to wait. Vijay Manjrekar, despite having a fractured thumb, — strode majestically to the wicket to help Borde achieve the coveted two separate hundreds in the match.

Chandu Borde was on 95 when Roy Gilchrist completed the over to Manjrekar. But Borde struggled to get the five runs from Smith. He took a single off Smith and faced Gilchrist at the other end. The second ball was a fiery bouncer. Borde attempted to hook it, but trod onto the wicket and was declared out. Thus this was ended of their splendid innings, four short of his second century in the match. It was a day to remember. The Indian innings saw many ups and downs and the big crowd had their money’s worth.

The match was memorable for so many players. Chandu Borde on the verge of being dropped from the side scored his first century in Tests. Hemu Adhikari won the toss and deprived his rival Alexander of winning the toss in all the Tests of the series. Ramakant Desai, making his debut in Tests, and he had captured the wickets of Rohan Kanhai, Holt, Collie Smith, and Gary Sobers for 169 runs.

This was indeed a fine piece of the bowling of sustained accuracy and superlative perseverance on a heart-breaking wicket. Conard Hunte missed off his bowling before he had opened his account and again at 30. In the absence of Umrigar, Pankaj Roy opened the bowling with Desi. 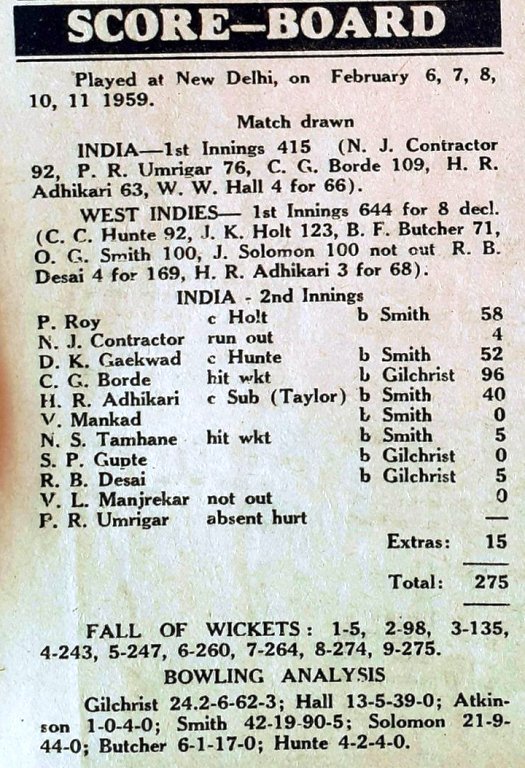