Nazar Muhammad was perhaps, the most outstanding opening batsman among those who served Pakistan in the country’s early days in Test cricket. Unfortunately, his playing career ended in 1953. When he was only 31 years old after he broke his right arm in a fall from an upper story window in Lahore. After an operation, the arm ended shorter than the other and less flexible, making it impossible for Nazar to have a prosperous career afterward.

He didn’t even play any first-class cricket after the 1952-53 seasons, by which time he had represented Pakistan in only their first five Test matches. Nazar Mohammad was born in Lahore on March 5, 1921, and followed in his eldest brother Mohammad Sharif’s footsteps, who played first-class cricket for Northern India as a right-hand middle-order batsman from 1935-36 to 1941-42.

As a right-hand opening batsman and right-arm medium-pacer or leg-break and googly bowler, Nazar made his first-class debut for Northern India in a Ranji Trophy Championship match against North Western Frontier Province (NWFP) at the Peshawar Club Ground in 1940-41, at the age of just 19. In the following season, Nazar Muhammad scored his career- highest of 175 against the same team (NWFP) in a Ranji Trophy match at Aitchison College Ground Lahore.

He has sharing an opening partnership of 273 runs with Jagdish Lal (130) which stood as a competition record for almost three decades. Jagdish Lal was the father of India’s Test opening batsman and now TV commentator Arun Lal. Nazar played seven seasons of first-class cricket, from 1940-41 to 1946-47, in undivided India for teams like Northern India, Muslims and North Zone.

When Pakistan became an independent nation, he appeared for Punjab (1947-48 to 1951-52) and Punjab University (1947-48). He also went on to become Pakistan’s most successful batsman in unofficial ‘Tests’ before the country became a full Test-playing nation in 1952. In seven such matches, he totaled 536 runs (ave 53.60) with a highest of 170 among his one hundred and three half-centuries.

Moreover, in Pakistan’s inaugural unofficial ‘Test’ match against the West Indies at Bagh-e-Jinnah Lahore in late November 1948, Nazar Muhammad 87 runs were top-scored in the first innings as he and Imtiaz Ahmed (76) gave their team a 148-run start. In another ‘Test’ match against Ceylon (Sri Lanka) at the Colombo Oval (now known as the P Saravanamuttu Stadium) in April 1949. Nazar (170) joined hands with Murawwat Hussain (169) in a magnificent 269-run partnership for the second wicket.

When Jock Livingston’s Commonwealth XI defeated Pakistan by an innings and 177 runs at Bagh-e-Jinnah Lahore in a ‘Test’ in November 1949. Nazar top-scored in either inning – with 60 out of 176 and 31 out of a pathetic 66 all out. Nazar confirmed his growing stature with a splendid 140 for Punjab, when the Marylebone Cricket Club (MCC) team from England played a side game at Sialkot in 1951-52.

He hit a worthy 66 for Pakistan against MCC in the first ‘Test’ that followed at Lahore’s Bagh-e-Jinnah, sharing a 96-run opening stand with the 16-year-old debutant Hanif Mohammad, who scored 26.

Nazar made only 6 and 19 in the second Test’ at the Karachi Gymkhana ground but Pakistan beat MCC by four wickets and, thus, earned passage to the ICC (then known as the Imperial Cricket Conference) as a full member with official Test-playing rights.

Nazar and Hanif opened the Pakistan batting in the country’s maiden Test match, against India at Delhi in October 1952. The two were off to a start of 64 runs. Nazar was run out for 27 runs but Hanif went on to make 51. Therefore, he went cheaply (for 7) in the second innings, as India emerged victorious by an innings and 70 runs.

Nazar, however, gained the distinction of facing the first ball in a Test match for Pakistan (from GS Ramchand) and also scoring the first run. In the second Test at Lucknow, which Pakistan won by an innings and 43 runs to claim their first Test match victory, Nazar made the first hundred for his country – an unbeaten 124 in eight hours 35 minutes of batting.

He not only earned the honor of carrying his bat through the completed innings but also became the first batsman in Test cricket history to have been on the field for the entire duration of a match! Nazar was an excellent close-in catcher in a team of somewhat poor fielders. He held seven smart catches in the five-Test matches against India in 1952-53.

The radio commentators dubbed him Prince of the Gully. In his five-Test match career – all matches having been played against India. Nazar Muhammad scored 277 runs with an average of 39.57, including a hundred and a half-century. He also had figures of 0-4 as an occasional bowler. In his first-class career (1940-41 to 1952-53), he appeared in 45 matches, scoring 2,739 runs at an average of 41.50 with a highest of 175 among his eight centuries and nine fifties.

He held 40 catches and captured five wickets (average 51.00) with a best of 1-3. He signed off his stint as a first-class cricketer with a hundred (123) for Pakistanis against East Zone at Jamshedpur on the 1952-53 tour. After he ceased to be an active player, Nazar turned to the umpire. From 1957 to 1978, he officiated in 57 first-class matches.

From 1959 to 1981, he also served as one of Pakistan’s national cricket coaches. One of his finest pupils was his own son Mudassar Nazar, who went on to play 76 Tests and 122 One-day Internationals (1976-77 to 1988-89) for Pakistan as a right-hand opening batsman and very useful right-arm medium-pacer. Mudassar Nazar has served as Director of the National Cricket Academy in Lahore and Director Game’s Development. 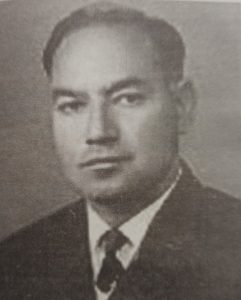 He was also a member of the Pakistan Eaglets team that toured England in 1952. He was a Cricketers Benefit Fund Series (CBFS) beneficiary in Sharjah in April 1982.

Nazar Muhammad left behind three sons and four daughters. Mubashir Nazar is elder to Mudassar and played first-class cricket briefly for the Income Tax Department and Lahore in 1976-77 and 1977-78.

The youngest Mufassir Nazar didn’t graduate to the first-class level but shone quite a bit in school cricket in Lahore. Nephew Azmat Hussain Nizami (the son of Mohammad Sharif) appeared for Lahore in 1967-68. Nazar’s illustrious family – he was the youngest of five brothers – included musician Feroze one of the finest music directors in the Pakistan film industry’s early years.

Nazar Muhammad and Mudassar Nazar are the only father-son combination in Test cricket history to have carried their bat through a completed inning. While Nazar did so at Lucknow with his 124 not out in 1952-53, Mudassar followed his father a little over 30 years later, scoring 152 not out – also against India – in a Test match at Gaddafi Stadium Lahore in January 1983. Nazar Muhammad Profile at Cricinfo.

Mr Devotor - October 5, 2021
0
This is a picture with historic significance in the history of Pakistan Cricket. You can recall the glorious moment when wicketkeeper Saleem Yousuf scooped...

Shahid Mahmood – First Pakistani to Take All 10 in First-Class...