Ernie Toshack was the son of a stationmaster, born in New South Wales on December 8, 1914. He was orphaned when a boy, eventually cared for by his relatives in Lyndhurst and played his early cricket and rugby league for Cowra. Ernie Toshack was one member of Don Bradman’s 1948 invincible side and was undefeated in their 34 matches. He died at the age of 88 on 11 May 2003.

Ernie Toshack played 12 Tests for Australia, grabbing 47 wickets at a wonderful average of 21.04 with his left-arm medium pacers. Toshack played his Test between 1945 and 1948 and was an integral member of Bradman’s invincible. He was 6 feet 2 inches tall bowler, who was very effective on sticky wickets, having abilities to reduce his speed to slow-medium pace and using a repertoire of off cutters, in-swingers, out-swingers, and leg breaks.

He was described as a player who would have been suitable for the modern limited over the game because of the persistent accuracy of his deliveries changes of pace, and movement in both directions. In his first Test against New Zealand in Wellington in 1945-46, he took magnificent 6 for 18 off 29 over’s upon the resumption of cricket after World War II. 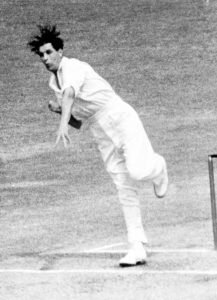 Toshack accurate bowling and stamina allowed Ray Lindwall and Keith Miller, to draw breath between short and incisive bursts of pace and swing bowling. Toshack was a regular member of the Australian side and he played in every Test over the next two summers. But fitness permitting played in eight of the 11 Tests during this period, taking 36 wickets. He had a major triumph in against India in Brisbane in 1947-48 with match figures of 5 for 2 and 6 for 29. He was also part of Bradman’s side who toured England in 1948, where he had to pass a medical examination of a knee injury.

Therefore, the knee injury eventually curtailed his international career. Toshack claimed 50 wickets on this famous tour with four five-wicket innings hauls, including a best of 7/81 against Yorkshire at Bramall Lane, including 11 Test wickets at 33.09! His lethal performance was the 5/40 in the second innings of the Second Test match at Lord’s.

After that, he was extremely unluckily when his knee failed in the first innings of the Fourth Test when he took 1/112. Toshack was unable to bowl in the second innings and missed the final Fifth Test match, marking the end of his Test career. Toshack contained the English batsmen using leg theory, thus English press descried his bowling style as negative. Toshack generally so close to the stumps that nearly every ball has to be played”

An operation enabled him to continue playing for another two seasons, but he did not play Test cricket again. Toshack also enjoyed a successful career with New South Wales making 48 first-class appearances from 1945-46 to 1949-50. He grabbed 195 wickets at a wonderful average of 20.37, including 12 times five-wicket hauls and one time 10 wickets in a match.

Interestingly, he usually batted at number 11, in Australia’s line-up and scored 78 runs at a batting average of 8.66, one of worst first-class aggregate and average among the tourists. But, in the Tests, Toshack was dismissed only once and averaged 51.00 with a series of tail-wagging performances, including his career-best of 20 not out.

Ernie Toshack was having captivating characters, due to his tall, striking, and rugged features. Toshack was dubbed his team-mates as “The Black Prince” and “The Film Star”. Post-retirement he joined with the construction field and spent more than 25 years as a foreman and supervisor on construction sites. He was having a keen interest in gardening to cultivate vegetables in Sydney. Toshack married Cathleen Hogan, in 1939, left a daughter, three granddaughters, and two great-granddaughters.

Mr Devotor - February 1, 2019
0
In the first Test against Australia at Dubai(DSC) 2018, Pakistan's off-spinner Bilal Asif register his name in the elite club of bowlers, who took...

Jeff Thomson – One of the Fastest Bowler of Cricket History

Colin Bland – Greatest Fielder in the History of Test Cricket