Former Caribbean opening batsman Conard Hunte was born on May 9, 1932, at Belleplaine. He started his first-class career with his native Barbados in 1950-51 and played in 44 test matches for West Indies. Hunte scored 3,245 runs at an average of 45.06. He hit 8 hundred and was naturally aggressive as a batsman. But when he played for his country, he adapted his technique in an effort to give the innings a solid base.

Sir Conard Cleophas Hunte was particularly strong off his legs, clipping the ball through mid-wicket or glancing fine. He achieved instant success when he played in his first series against Pakistan in 1957-58. He amassed 622 runs at a healthy average of 77.75. 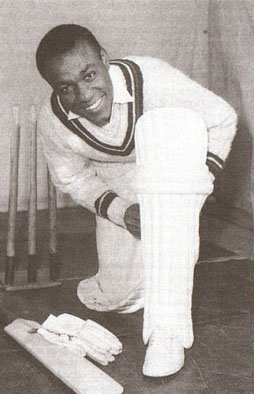 That included a majestic 142 runs in his first match at Bridgetown and a career-best 260 in his third match at Kingston.  In this inning, he added 446 runs for the second wicket with Sir Garry Sobers. Who made his then-record Test score of 365 not out? He also managed another beautiful inning in the 4th test match at Georgetown, scoring 114 runs. Conard Hunte’s finest overseas tour came in England in 1963 when he plundered 471 runs in the Test series to head the average at 58.87. The highest of Hunte’s three double centuries was 263 for Barbados against Jamaica in 1961-62. His first-class career spanning 17 years brought him 8,916 runs at 43.92. He scored 16 centuries and held 68 catches. Moreover, to make a stumping as an emergency wicket-keeper and also captured 17 wickets at 37.88 runs apiece.

As a batsman, Hunte was very reliable, though he seldom had a completely satisfactory partner. He hooked with power and times his off-drive perfectly. He was a fine fielder, especially close to the bat, and occasionally bowled slow medium cutters. Conard Hunte was the son of a sugar plantation worker who belongs to a poor family who lived in a one-room house, and he was one of nine children.

In 194-65, he was an outstanding batsman on the tour of Australia with 550 runs at 61.11 and the highest score of 89, but consistency personified. On his second tour of England in 1966, as vice-captain. He was not as dominant as before, but again in the first Test match at Manchester. However, he produced an excellent inning of 108. Conard Hunte was also knighted by the Barbados Government in 1998 for his contribution to Cricket. He also served as a match referee on the ICC international panel on numerous occasions and deputized for Clyde Walcott on the last two days of the Third Test between England and Pakistan at Old Trafford, Manchester in 1992.

After his cricket career was over in 1967, he worked for the Moral Rearmament movement and coached in South African Townships. Conard Hunte died in hospital in Sydney, Australia on December 3, 1999, at the age of 67.

Conard Hunte died due to a massive heart attack. He was elected president of the Barbados Cricket Association in October 1999. He felt ill while playing tennis with friends and died soon afterward. Hunte was in Australia to address an international conference on social issues.

Mr Devotor - February 2, 2019
0
Most Stumpings in Test Cricket record has stood for more than 75 years now, the only wicketkeeper to make more than 50 stumpings in...