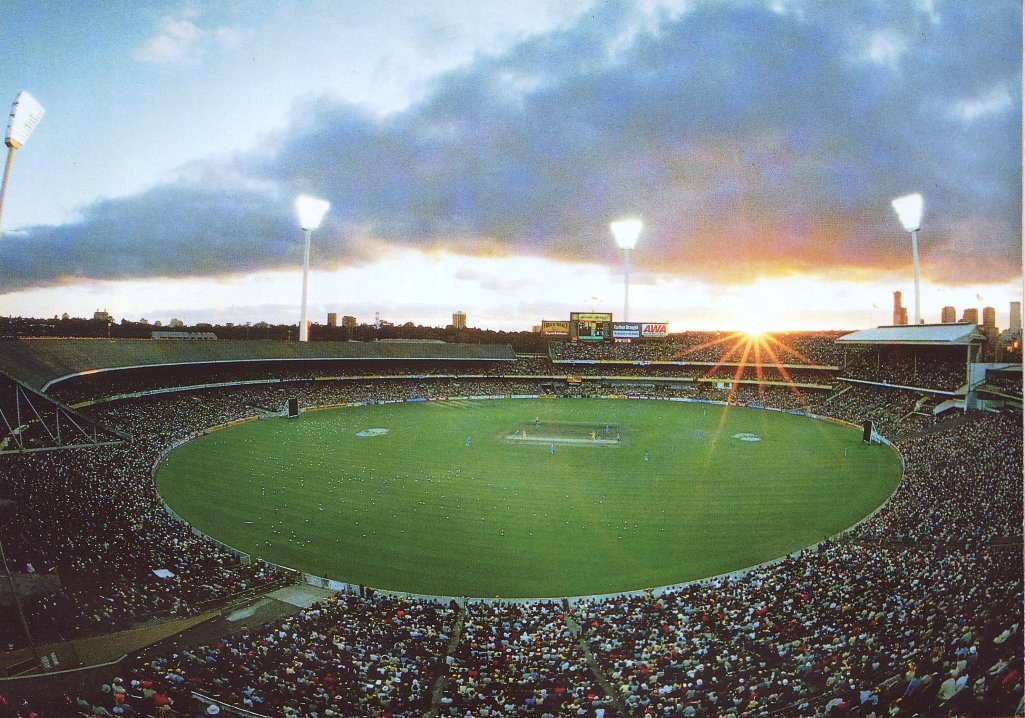 David Frith reports from Melbourne on the climax of the World Championship of Cricket Final, 1984-85. The tournament was staged by the Victorian Cricket Association to commemorate the 150th anniversary of the foundation of the State AWA the world was interpreted quite differently by the one man who mattered.

There ensued a face-saving stand of 68 off 134 balls for Pakistan’s for the fifth wicket. Javed Miandad, the captain, and Imran Khan, the former captain, in NSW cap with badge covered, played with vigor blended with appropriate caution, surviving the odd close squeak and helping to ensure that the lights would not have to be switched off early. The introduction of Sivaramakrishnan did the trick, though only indirectly. Imran,

AS INDIA’S captain Sunil Gavaskar mounted the floodlit victory rostrum at the MCG and thanked his teammates for giving him such a happy last day as captain of his country, the thought sank in that this was no fluke. India may find it next to impossible to win a one-day international at home, but their record abroad is formidable. First came the 1983 World Cup. A year later, they won the more restricted Asia Cup.

And now the World Championship of Cricket, in a final dubbed in the popular as the ‘Curry Cup’– between, as one banner irreverently would have it, the Bus Conductors and the Tram Drivers. These rivals, so often at bitter loggerheads in the past, now displayed a prominent sense of fraternity. Pakistan, indeed, had done India the most estimable of favors by knocking out West Indies in the semi-final.

In keeping with the overall tone of the Championship, there was to be no frenetic conclusion to the final. But it had its moments of drama and spectacle. And there was the added aesthetic appeal of 20-odd overs of spin bowling, which would have been absent had Australia and West Indies met the promoters’ ardent requirements by reaching the final. The sun goes down, and the lights come up at Melbourne, with a huge crowd to witness the Australia-England opening match. Nothing like such attendance was seen again during the tournament.

In tatters The Indians, in their sky-blue strip with yellow trims, sprinkled onto the field at 2.30 pm, followed by the Pakistan openers in their vivid emerald green uniforms. By the 12th over, the innings were in tatters. Kapil Dev, looking friskier than during the Tests against England, first tempted Mohsin Khan (batting with a metal guard on a chipped finger) into clipping the ball to deep square leg.

Then the vociferous, aggressive wicketkeeper Sadanand Viswanath held Mudassar’s edge off a near-wide: 29 for 2, a shaky start, but no cause for panic … until the brilliant, amusing little Qasim Omar was bowled with a lovely yorker on the first ball, playing late at it like a sleepwalker. He awoke on his return journey to aim a burst of machine-gun fire from his bat at the sobbing cartoon duck on the electronic scoreboard screen. Three wickets to Kapil Dev, and the initiative firmly with India — further tightened when Rameez fell next over, clipping Chetan Sharma to square leg.

It would have been a complete shamble if umpire Isherwood had agreed with the multitude that Imran had got a glove to his second ball, taken by Viswanath. What was apparent not only to those watching 100 yards away and on the giant screen but to an estimated 100 million television viewers around everything. He was caught behind next over for 10, and Anil Dalpat went a few balls later, slashing a wide googly from Sivarama to cover point.

Wasim Raja’s experience came in useful as a further 31 runs came from the remaining eight overs, Azeem Hafeez, with his mis-formed right hand, gallantly holding on. The total of 176 was something to defend, but it all seemed to depend either on Imran’s achieving a similar operational triumph to Kapil’s with the new ball or Mudassar’s doing another of his surprise mini-Lillee tricks. The absence of the injured Wasim Akram depleted Pakistan’s attack beyond measure.

India began cautiously, and Imran has worked away for only two singles in his first four overs. The first cannonball was fired in the Full score of the final of the 10th over, when Srikanth, the amazing little Topol figure in the large helmet, wafted Azeem Hafeez into the crowd beyond long-off. After 16 overs, they were 45 without loss, as opposed to Pakistan’s 40 for 4.

Having measured the five-iron shot precisely, Srikanth fired off another six over long-off, this time off Wasim Raja, and this time with alarming consequences. Rameez backed and twisted desperately under the high hit and crashed into the railings. For some obscure reason, five of his teammates ran to his winded prostrate figure and began to pummel his chest and back, probably inflicting even more damage than the railings. He eventually walked from the field, ashen-faced, and Rashid Khan substituted.

When, two overs later, Srikanth whacked another ball into the same zone, Malik touched it but felled the catch, wisely more mindful of the lethal railings and his colleagues’ misguided eagerness to play Dr. Kildare. The hundred came in the 28th over, and people were yawning, not only because of the late hour. Srikanth was out next over, nicely held high at point by Wasim Raja, having made 67 off 78 balls out of 103 with the resolute Ravi Shastri.

Azharuddin was missed by Anil Dalpat at 1, a fairly easy chance, and when Malik came on as Pakistan’s answer to Jeremy Coney, it was final countdown time. Naqqash did strike a second blow, bowling Azharuddin, who still left Australian audiences a little short of a true appreciation of his value as a Test match batsman. That will come later this year.

Sivarama, Gavaskar, Shastri and Srikanth, their Test and one-day defeats by England behind them, relish possession of the World Championship trophy (A cheque for $A32,000 (£20,000) With Wasim Raja bowling a boring medium-pace — though Shastri should have been caught by Dalpat off him at 60 – the Indians did just as much as they needed.

An eight-wicket win was duly chalked up around 2200 hours, and Srikanth soon had his Man of the Match cheque, Gavaskar his trophy and the team’s $A32,000, while Shastri was quickly behind the wheel of his $A40,000 Audi as ‘Champion of Champions’ for the series, conveying his joyous team around the ground to hearty cheers from Indian and other spectators.

The crowd, the biggest (35,296) ever to watch a one-day match at the MCG not involving Australia, seemed contented enough. From the British journalists who had been on tour since October 30, there were sighs of relief. From the Australian media men, there were graphic expressions of gratitude that the cluttered international season was over. For the Channel 9 commentary team, another greatest day of greatest catches and greatest hits and greatest everything else had come to a close.

having passed 1000 runs in one-day internationals, steered him backward of point, set off, thought better of it, but failed to beat Gavaskar’s crucial, smart throw. The long-legged Salim Malik, overanxious to drive, never settled. Missed once, he holed out at long-off. Next ball, Miandad was stumped, a classic dismissal as he advanced to the leg-break, which fizzed past the outside edge. For the second time, a hattrick was in the offing, and Tahir Naqqash almost obliged. Obviously sent in as a ‘hitman, he banged Sivarama’s first ball to him just clear of Gavaskar at long-on. This is one of the memorable World Championship of Cricket Final 1984-85 played between arch-rivals.

David Sheppard – A Tall, Graceful off Side Batsman