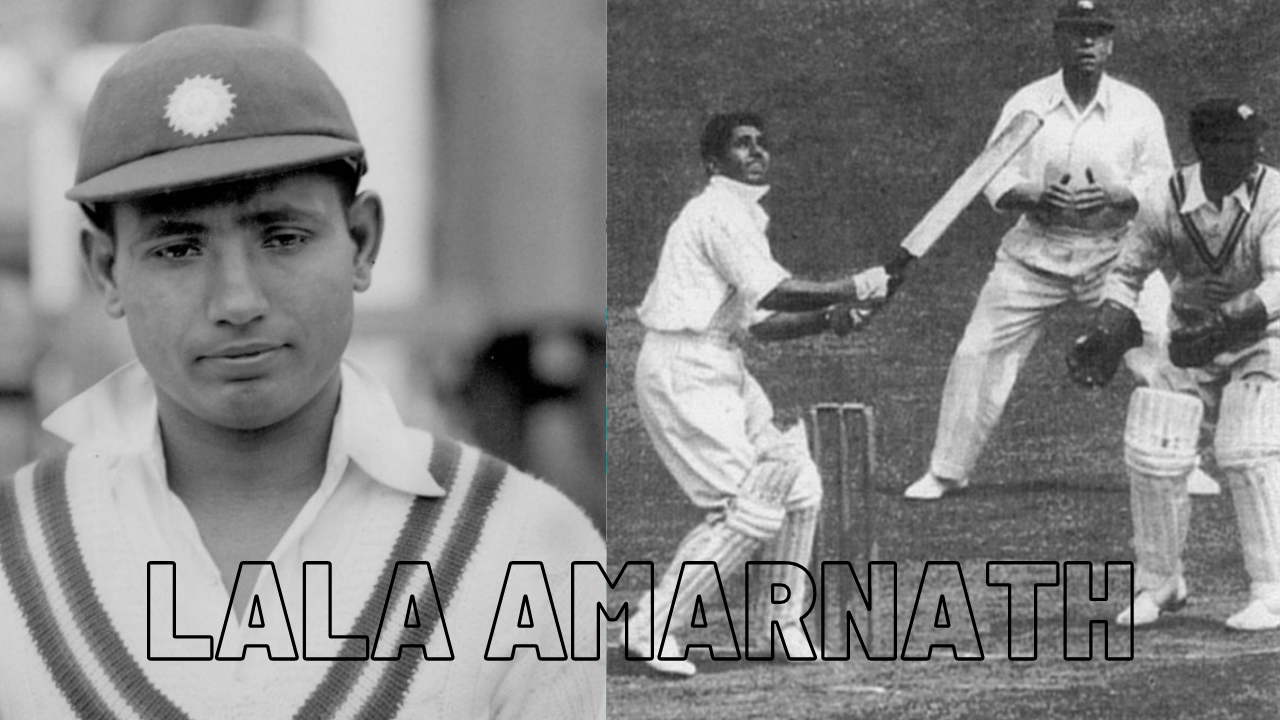 Lala Amarnath is the most romantic figure of early Indian Test cricket. As a young tearaway, he scored a century on debut for India against England in Bombay in 1933. He was later sent home for indiscipline by his captain, the appalling Maharaj Kumar of Vizianagram, during the disastrous 1936 India tour of England. Only after World War II was Amarnath at last granted his due and appointed Indian captain. Later two sons, Mohinder Amarnath and Surinder Amarnath followed their father into the national team, creating a famous cricketing dynasty.

His third son, Rajender Amarnath, has written his father’s biography, The Making of a Legend. This work of filial celebration contains stories that present Pakistan and its leading sportsmen (in particular Abdul Hafeez Kardar) in an unpleasant light. He asserts that Kardar assaulted Lala Amarnath in a hotel lobby in Lahore during the Test match of January 1955. However, there is no corroboration for this story. All surviving members of the Pakistan team have confirmed they’ve never heard any word of such an incident at the time.

Furthermore, Rajender Amarnath’s book leaves out the single most essential and formative element of his father’s early life: his adoption by a Muslim cricketing family from Lahore. This was the Rana family, whose wider connections include the controversial umpire Shakoor Rana, as well as the Test cricketers Shafqat and Azmat. In the 1920s, the senior cricketing Rana was Tawakkal Majid, a leading light in Crescent, one of the big cricket clubs in Lahore.

Tawakkal’s son Jimmy, over coffee in the Lahore Gymkhana Club. Jamil ‘Jimmy’ Rana, himself a fine cricketer in his day who played first-class cricket for Punjab, told the following story: On the way home from a match my father passed some boys playing in the street. One of them unleashed a most sublime cover drive. He asked him to play it again, and he did. He had a very good eye. The boy was Lala Amarnath. My father said: ‘Take me to your family.’ They turned out to be very poor people.

He offered to take him into our house and pay for him to learn how to be a cricketer. They were delighted. As a result, Amarnath was brought up as a member of our family. So I asked Jimmy Rana to travel with me to the old city, and walk with me from Amarnath’s childhood home (where he had lived with his paternal grandparents) in the old Hindu quarter of Lahore to his new home with the Rana family in a side street near neighboring Mochi Gate.

The distance was scarcely 200 yards and took us five minutes through crowded streets. Amarnath’s home (in what is now the flourishing Shah Alam market) no longer exists. Like almost all the buildings in the old Hindu quarter, it was burnt down at the time of Partition.

Jimmy Rana told me that the Hindus were well-armed and held out for many days against the encircling Muslim mobs. Eventually, however, the killers broke in and inflicted terrible bloodshed, using cans of kerosene to burn down the quarter, including the house where young Amarnath had been raised. By then Amarnath was at his training camp in Poona, captain designates for the 1947–48 India tour of Australia. All this lay in an unimaginable future when Amarnath went to live with his new patrons in the early 1920s. His new family resided in a distinguished townhouse: it is still there, though dilapidated and marked for demolition.

Jimmy Rana showed me the first-floor room where his famous guest had entertained Lahore’s cricketers and kept his growing collection of cricketing trophies. ‘Even though we were a Muslim family bringing up a Hindu, we never once urged him to convert,’ Jimmy told me with pride.

He added that at the time Lala Amarnath arrived, Jimmy’s grandfather had just installed electricity, one of the first Lahorites to do so. For many years, young students would cluster in the streets outside the windows of the house, so that they could continue their studies after dark. Perhaps more than 600,000 people lived in Lahore in those days, mostly in the walled city.

There were no cars, no telephones, and no secrets. The very rich traveled by tonga. Everybody else walked. If you wanted to leave a message you went to your local barber and he would pass it on (the barber would also carry out circumcisions). Amarnath was not the only great cricketer sponsored by the Ranas. Jimmy Rana told me that the others included Amir Elahi, the leading leg break and googly bowler of the interwar era.

He was to accompany Amarnath on the disastrous 1936 tour of England, and ten years later was a member of Amarnath’s team that toured Australia. In 1952, aged forty-four, he played five Tests against Amarnath’s India as a member of Kardar’s touring party. Naturally, Lala Amarnath played for Crescent, the Rana family club. Crescent was the most dynamic team in Lahore, a product of the city’s bustling middle classes. Its bitter rival was Mamdot, a team built around princely power which included such great players as Jahangir Khan.

Mamdot reflected the style of the feudal clubs which dominated in the earliest period of Lahori cricket, during the first decades of the twentieth century. During the later stages of World War Two, Zulfiqar Ali Bhutto, future president of Pakistan, is said to have played for Mamdot.90 Crescent was more urban, insurgent, and allied to the rising Muslim League. Many of its players had studied at Islamia College.91 Indeed the competition between the two great Lahorite clubs mirrored the epic contests between Government and Islamia College. Like many other clubs, Crescent played at Minto Park, just outside the city walls.

They would get to the ground early to prepare the wickets. Jimmy Rana told me how proud his father had been of Amarnath, how many trophies their young Hindu prodigy had brought in, and how Amarnath was friends with all the players. To illustrate the closeness he told me how, on the eve of an important final between Crescent and Mamdot at the Bagh-e-Jinnah, Mamdot planned to send a band of goondas (thugs) to beat up Amarnath with cricket bats with the intention of injuring him so badly that he would not be able to play. Crescent got word of this scheme and provided a bodyguard. ‘The players covered him with their bodies so that he was not hurt,’ Jimmy Rana told me. A different version of this story appears in Rajender Amarnath’s biography.

According to Rajender, his father later complained that ‘I had to perform better than all the other players, as I was the only Hindu playing for the predominantly Muslim club.’ Rajender recounts that the attack on Amarnath took place on the eve of a match between Hindus and Muslims: ‘That evening, Amarnath was strolling in the Anarkali Bazaar with his friends, when suddenly a group of supporters of the Muslim team attacked them with lathis shouting, “Break Amarnath’s bones!” Since he was the fulcrum of the Hindu team, his friends fell on him, covering him and taking blows on their own bodies, till reinforcements in the form of Hindu supporters came to their rescue.’ Crescent could not hold such a brilliant player as Amarnath for long.

Frank Tarrant, an Australian who worked as cricket coach for the Maharajah of Patiala, saw Amarnath play and recommended him to his employer, thus introducing Amarnath to the alluring (and better-remunerated) world of princely cricket. Jimmy Rana, however, insists that Amarnath was never to forget the kindness that had been shown to him. Standing outside the light-blue front door of his old family home, he told me: Whenever he came to Pakistan after Partition, he used to call on my family. Once he brought two sons.

He bowed down in reverence at the threshold of this house. He ordered his sons to do the same. One of them got some dirt from the floor on his forehead and brought out a handkerchief to remove it. Amarnath told him, ‘Put that handkerchief away and spread the dirt on your face. If this house hadn’t been here, you two would have been playing in the street. So when, in 1952, Pakistan faced India at cricket in a Test match for the first time, the two captains – Lala Amarnath and Abdul Hafeez Kardar – would have understood each other very well.

They had been brought up in the same city, played as boys on the same streets, represented the same clubs, and tested their skills against the same players. They spoke the same language, ate the same food, and wore the same clothes. But for an accident of religion and history, Lala Amarnath and Abdul Hafeez Kardar would have been on the same side.

In India, Lala Amarnath is understood as a Hindu who escaped Muslim prejudice and hostility to make a name for himself as a great Indian cricketer. But in Pakistan, he is remembered as a product of the brilliant Lahorite cricketing culture of the interwar period who would never have realized his prodigious sporting potential but for the friendship of Muslims. He carried the burden of his twin identities with him all his life. In one way or another, a version of this tragic conflict has haunted Pakistan and Indian cricket ever since.

Mr Devotor - March 6, 2022
0
The former Indian swing bowler Subrata Guha was an accurate right-arm medium pace bowler who could swing the ball in both ways. Unfortunately, his...