Chandrasekhar Trimbak Sarwate born on July 22, 1920, in Madhya Pradesh, India. Chandu Sarwate was a former Indian Test player and national selector. He has died in Indore on December 23, 2003, following a protracted illness. Chandu Sarwate represented Indian in 9 Test matches scoring only 208 runs at 13.00 with his 37 was the highest score. He also has taken 3 wickets at an average of 124.66 with the best figure of 1 for 16.

However, his international cricket records are very modest, but his first-class records were superb. His first-class career was spanning over 32 years. He played 171 matches scoring 7,430 runs at an average of 32.73 with the highest score of 246 against Bengal in 1950-51, including 14 hundred and 38 fifties and also held 91 catches.

Chandu Sarwate mostly played for Holkar and took 494 wickets with his mix of off-spin and leg-spin bowling. He took five wickets in 26 times and 10 wickets in a match 3 times. His bowling average was 23.54 with the career-best figure of 9 for 61 against Mysore in 1945-46. 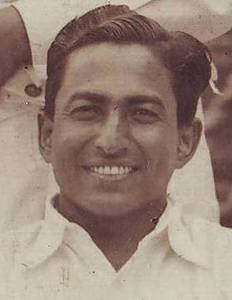 Chandrasekhar Trimbak Sarwate’s best moments in cricket came when the Indian cricket team toured England in 1946. He played a match against Surrey at the Oval. He normally batted in the middle order, came in at No 10, and added 249 runs for the last wicket with Shute Banerjee.

Both batsmen hit centuries the only instance in first-class cricket when No 10, and No 11 scored hundreds. India recovered from 205/9 to 9/454. Though he wasn’t satisfied with that effort. Chandu Sarwate went on to take 5 for 54 in Surrey’s second innings as the Indians wrapped up a nine-wicket win.

Chandu Sarwate was also a national selector for three seasons from 1980-81 to 1982-83. He achieved modest success while playing for India but had one of the longest first-class careers for an Indian Player. However, his name will be forever linked with the famous last wicket partnership of 249 runs with Shute Banerjee in the Indian’ match against Surrey at The Oval in 1946.

He was essentially a middle-order batsman who also opened the batting for India. The stand was not broken till about an hour after the start of play on the second day by which time the duo had written themselves into the record books. Sarwate remained unbeaten with 124 while Banerjee was out for 121. For good measure, Sarwate also captured five wickets against Surrey.

But of  Course, Chandu Sarwate will be remembered for many other things. For putting on 124 runs for the first wicket with Vino Mankad at Melbourne in 1948 against a strong bowling attack of Australia. He faced a lot of courage and determination against Ray Lindwall, Miller, Johnston and Johnson. For being part of the great Holkar team for several years. And for playing in the Ranji Trophy for well over three decades and running up a superb all-around record.

He made his debut in the national competition at the age of 16. At that time, he called it a day he was in his 50th year. He also played one Test match against the Australia Service team in 1945-46 and the first Commonwealth side in 1950-51. By profession, he was a fingerprint expert. Read About – Morappakkam Gopalan – The Man Sent Down First Ball in Ranji Trophy

Mr Devotor - February 22, 2022
0
Tom Cartwright (England allrounder) Unlike D’Oliveira, Cartwright had already been on an England tour of South Africa but missed a good deal of the...

Alistair Cook – 5th Batsman to Score a Century in his First...