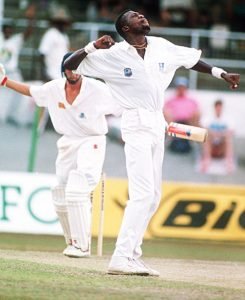 Can anyone be as ubiquitous as Curtly Ambrose? Over the decade of nonstop cricket had failed to change him. He was miserly as he was young when hailed as “Young Bird” as a token of his resemblance to “Big Bird” Joel Garner. He had rallied with Malcom Marshall to crush England.

Many times, he crushed England with several bowlers; he did so with Courtney Walsh. Then Marshall had accomplished a record-shattering feat. The year 1988 had seen England humbled by the Calypso juggernaut. This time sadly, it was the other way around.

Ironically but fittingly, Walsh and Ambrose, The Blackwash of 1988 were the only two men to hold their heads high. The West Indies knew it. And England and the rest of the whole wide world confirmed it. So, where all his teammates had fallen prey to the extreme pressure generated by the relentless Englishmen.

They could not score off him and when it was his turn to bat, he could not tie him down. When Dominic Cork finally found the edge of his bat for one last time, an era had come to an end. Michael Atherton, the catcher knew it. And he too was shattered as he scooped the ball in slow motion as his teammate’s assembled for a guard of honor for the eternal nemesis of theirs.

Few cricketing scenes have been more emotional. Everyone in the dressing room, the Oval itself packed to capacity, the umpires all joined to bid farewell to one of the greatest sons of cricket. I knew of Ambrose since he hit cricket. I was nine and a Pakistani team was touring the West Indies in 1988. 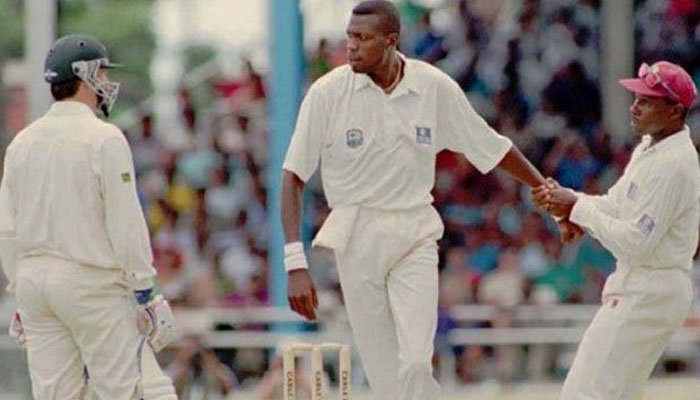 Malcolm Marshall would be deemed unfit for the series and his place would go to a young fast bowler, reportedly in the Joel Garner mold. There was no TV coverage then (Of course, there was. Live TV coverage had been introduced in Pakistan way back in 1967. But Ambrose needed nothing.

He took four wickets in each of his first two one-dayers and there was no looking back. Success came to him naturally. He never swung the ball. It would however, land with precision on its seam and then deviate laterally. His height always meant an added degree of bounce so that the ball pitched on a good length would cross the batsman around his rib cage.

This was not all the half volley, of very perfect for the drive could often be a screaming Yorker, at least in his early days. And hardly saw him get punished. Occasionally someone would hit him out of the ground but it took someone of the stature of Imran Khan to have a measure of him.

In yet another Sharjah series, Imran once hit him for massive Sixes plundering 20 runs off one of his overs. That was way back in 1989, to some the very match that saw Wasim Akram take his first hat-trick, Ambrose being the final of his three victims.

Two years later, Imran Khan repeated the feat confirming that Ambrose was after all humans. Within a year of his debut, he had established himself as a virtuoso; if anything confirmed it, it was the Sharjah final of 1988. Pakistan was chasing a mere 235 on a placid batting track and with stunning batting shows throughout the series were favorites to clinch the trophy.

Curtly Ambrose had other ideas. Within a matter of few testing over’s and a fewer bullet-like Yorkers, he had shattered the spine of the strong Pakistani batting line-up. A West Indian success became the writing on the wall. Malcolm Marshall formed a deadly combination with Ambrose.

But it was Courtney Walsh whose pairing with Curtly Ambrose became With South Africa poised to win and end the unbeaten home run of the Calypsos, Walsh struck. Peter Kirsten, a dapper right-hander played on to an inswinger and then there was no stopping the two. Walsh got four and Ambrose six and the Springboks, as they were then called, lost eight wickets for 25 runs. 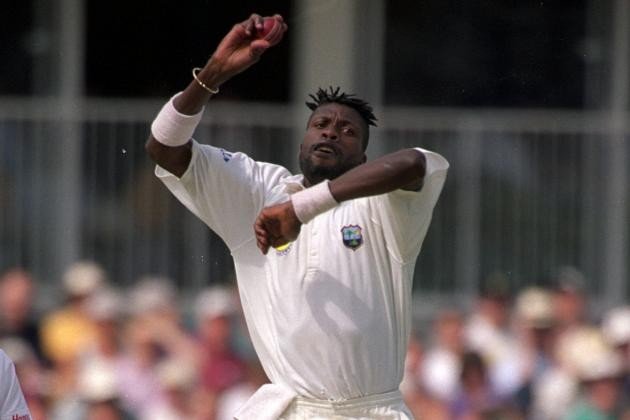 And that was a glorious beginning for the heirs to the last of the golden age fast bowlers of West Indian cricket legendary. How did it start? Well! With South Africa’s return Test! Fittingly the first Test match after Marshall’s retirement and, Walsh returning from an exile against public desires. They wanted a local Barbadian boy named Andy Cummins to play instead.

Walsh played and he and Ambrose went to make history. With South Africa poised to win and end the unbeaten home run of the Calypsos, Walsh struck. Peter Kirsten, a dapper right-hander played on to an inswinger and then there was no stopping the two. Walsh got four and Ambrose six and the Springboks, as they were then called, lost eight wickets for 26 runs.

And that was a glorious beginning for the heir to the last of the golden age fast bowlers of West Indian crick- A year later, the two set up another memorable triumph. Australia needed 180 odd to win a Test match at Adelaide and regain the Sir Frank Worrell Trophy Ambrose and Walsh soon had them reeling at eight for 76.

The tail showed guts and edged and inched in a way to an unlikely win Then Walsh struck and Craig McDermott, with a win just two runs away, failed to deal with a brute ball. West Indians had won the closest Test match in the history! With everything working for them, Ambrose predicted a West Indian triumph and in a spell of sustained hostility (seven wickets for two runs in 25 balls) sealed it up. The Frank Worrell Trophy was still theirs. Can anyone match that?

Curtly Ambrose had his way of prophesying wins and he did that at will. When West Indians 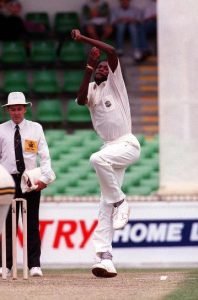 struggled against Mark Taylor’s men in 1995, Ambrose announced that he would level the series for his side. And he did exactly that. With stunning match figures of nine for 65, he teamed up again with Walsh (eight for 98) to humiliate Australia.

It was ironies that the team failed to derive inspiration from such a grand show. There were more such shows. When the West Indians toured Australia two seasons later, the first thing they did was to go two down. Ambrose was whacked. He announced a century for Lara and 10 wickets for himself in the next Test, which would be a West Indian triumph.

Though Brian Lara failed, Ambrose was only denied his tenth wicket because of the inspired shows of his teammates. This was Ambrose the same season when Pakistani fast bowlers had reduced his side to a pathetic 42 for seven in a cup final, Ambrose refused to budge.

He was certainly a proud man. At that time Allan Donald and Glen McGrath have become experts at “working out’ batsmen. Gary Kirsten, Brian Lara and, Michael Atherton have been famous victims of these two. Few would remember how Amby had sorted out Michael Atherton and indeed Graeme Hick, who had come into international cricket with a huge reputation to guard, with ease. 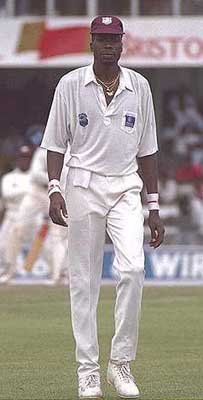 In fact, while Atherton managed to gather himself, Hick’s career had been dented so severely that he never managed to fulfill his immense potential. Ambrose and Walsh! They shattered England back in 1994. Defending a paltry 193, on a wicket that was certainly not a minefield, the two realized that the support bowlers were not good enough.

And they stamped it in style. The back-ups were not needed at all! They bowled unchanged and like their show of two years ago, Ambrose had six and Walsh four. England was shot out for 46! He certainly had his heartaches. I believe he must have been drained after losing to Australia in the semi-final of 1996, cricket World Cup.

He and Ian Bishop had reduced Mark Taylor’s men to four for 15 and yet ended up on the losing side. Three years later, it was a similar story, again Australia ending the World Cup dreams. And indeed not seeing West Indies win this last Test series, his last crusade would be another.

One could just sense the tears in his eyes as he labored his way towards the pavilion one final time. But talk of guts! He had batted with more flair than any- of the one for his almost run-a-ball 27. Who can forget that nerve-wracking partnership with Brian Lara as the West Indians inched towards a memorable win?

Curtly Ambrose weathered the storm kicked up by Jason Gillespie bowling at his fastest and menacing best, spearing down toe-crushers and Glenn McGrath was making the ball reverse swing like a boomerang. And he always seemed to reserve his best for Australia and England! In his heyday, Amby would be deadly.

As time wore on he grew miserly if less threatening by his standards. Take this very series; his 22 over’s for 22 runs at Lord’s and again two displays of nothing-away spells in his finale. And it was this very trait of his that got him perhaps the greatest of all compliments.

Michael Atherton the defeated England captain was asked to comment about the Glen McGrath after his 36 wicket return in the 1997 Ashes. How did Atherton reply? He is like Curtly Ambrose, nothing gives away.

Forgotten Spell – Curtly Ambrose 6 for 52 vs England at...