Denis Compton was as glamorous a cricketer as England has ever possessed. He played in a style that captivated the crowds, last-second sweeps blending with sumptuous cover drives. And there was a devil-may-care attitude to everything he did that meant he was not someone to take your eye off.

He rose fast, unknown one minute, scoring runs for England against Australia the next when only a few days past his 20th birthday. Until he developed a chronic knee problem in his early 30s as a result of a parallel career as a winger with Arsenal.

Denis Compton belongs to a below middle-class family, as his father decorator business floundered and he constraint to a lorry driver. His brother Leslie Compton also played cricket for Middlesex. But Compton never ashamed to work hard for a cricketing career. He never really struggled and perhaps as a result never really lost the boyish enthusiasm that suggested he thought everything was just a lark.

But by then, he was already the nation’s darling following his feats in the years immediately after the Second World War, when his batting touched a sublime peak and sport was providing the masses with the perfect antidote to the miseries of war.

If all that was not enough, Compton was handsome too, with an unruly mop of black hair tamed with Brylcreem, but he exhibited the kind of flaws that suggested he was perhaps not really that different from the man in the street. His running between the wickets was chaotic and his time-keeping atrocious.

The stories one has heard of him arriving at Lord’s in his dinner jacket after a night on the tiles and scoring hundreds with borrowed bats can only appeal. He, like others, missed out on some of his best years to the war but that at least meant he was hungry for the game and had reached full maturity when peace finally came.

Compton made his Test debut against New Zealand in the 3rd Test at the Oval in 1937. He was playing delightful strokes before he got run out at 65. In the next summer, Compton produced a magnificent match-saving inning of 102 and 76 at Lord’s against Australia. In 1939, he played a lethal inning of 129 against West Indies at Lord’s and made a 248 runs partnership with Hutton.

His achievements for Middlesex and England in the late 1940s, and the long hot summer of 1947 in particular. When he smashed so many records, purely are the stuff of legend. That his friend and teammate Bill Edrich was also in the stupendous form at the same time, and well worth watching, only added to the attraction.

It must have seemed like a racing certainty that one or other, and possibly both, would come off on any given day. No one ever measured Compton by figures alone, but the figures say a lot about his dominance during this golden time.

In the 1946 season, he scored a plethora of runs with many hundreds than any other player (2,403 runs, ten hundred). Therefore, in 1947, he again in super form, scored a heap of runs and more hundreds than anyone, not only in that season but in any season before or since 3,816 runs and 18 hundred.

Hence, in 1948, only Len Hutton did better than Denis Compton’s 2,451 runs and nine hundred. After that in 1949, his tallies of 2,530 runs and nine hundred were eclipsed only by Hutton and James Langridge. In the winter of 1946–47 he toured Australia and New Zealand, and in 1948–49 South Africa, and on each occasion was again the leading batsman in terms of both runs and centuries.

In an up-country match on the South Africa tour, he scored a triple century in just 181 minutes, which remains the fastest on record. For England, he was, along with Hutton, one of the two best batsmen in the side. Between 1946 and 1949, he scored 11 hundred in the space of 20 Tests, four against Australia, five against South Africa and two against New Zealand.

Moreover, the 753 runs he scored in the series with South Africa in 1947 still stands as the record for an England batsman in a home series. His duels with Ray Lindwall and Keith Miller formed part of the folklore of the period, and initially, at least he probably had the better of things.

Although his instinct was to play extravagantly and take more risks than Hutton would have countenanced, his ability to score runs against Lindwall and Miller showed how good his defense must have been. He certainly applied himself when he scored twin centuries to earn England a draw in Adelaide in 1946–47.

At Old Trafford in 1948, he was forced to retire early in his innings after edging a ball from Lindwall on to his head. But he returned bravely – possibly strengthened by a brandy or two – at 119 for five to score a sparkling 145 not out and hoist his side to 363.

How appropriate that the man of the series award in Ashes Tests is now called the Compton–Miller medal. The onset of knee trouble in 1949 resulted in surgery the following year and was a contributory factor in Compton’s wretched series in Australia in 1950–51 when he mustered just 53 runs in his eight innings, a salutary reminder that even the greatest can struggle badly at times.

He had been appointed vice-captain for that tour, the first modern professional to be given the post and a step that paved the way to Hutton’s subsequent appointment to the full captaincy. After that, Denis Compton did not quite so consistently touch the heights of old, and never hit another hundred against Australia. But he nevertheless enjoyed some special moments.

He hit the winning runs at The Oval in 1953 when the Ashes were regained for the first time in 19 years. In 1954 he batted less than five hours in scoring his highest Test score of 278 runs against Pakistan at Trent Bridge. In the famous Oval Test match, he produced 53 runs on a difficult wet pitch which he inclined to his one of the best inning.

Moreover, the series against South Africa in 1955, he was again in brilliant form by scoring 492 runs. In 1952, he scored his 100th hundred in first-class cricket and took fewer innings to do so than any other player apart from Don Bradman.

That, and the fact he averaged more than 50 in both first-class cricket and Tests. That should prove beyond all doubt that his technique was much sounder than his popular reputation as a dasher would suggest. So obvious were Compton’s talents that he joined Middlesex and Arsenal when he left school at 14.

He scored 1,000 runs in the year of his county debut, at 18 the youngest ever to do so, and the following year when he scored 65 in his first match for England, he only narrowly failed to top 2,000 runs. In 1938, he scored 102 in his first Test against Australia – at the age of 20 years 19 days. Then he remains the youngest to score a century for England.

However, in the next match, he saved the game with an unbeaten 76. Nor were his footballing achievements insignificant. He won league and cup with Arsenal and played wartime internationals for England. It seems remarkable now that anyone could combine serious careers in cricket and football at the same time.

Also, Denis Compton managed it for many years, although his football did sometimes prevent him touring with England in the winter. The quick feet he needed for football must have helped his batting. It should also be remembered that Compton was a very useful left-arm wrist-spinner who took more than 600 first-class wickets, including 73 in his amazing summer of 1947!

Denis Compton married three times, having one son “Brian” from his first wife. From his second wife, he had two sons, both played cricket for Natal. He had two daughters from his third wife. Moreover, his grandson Nick Compton also played for England and made his test debut against India at Ahmedabad in 2012-13. So, his legacy is continuing to serve England.

After retirement, he was commentating for BBC and columnist for Sunday Express. Denis Compton always young as heart, even towards his hip pain to the knee. The finest England batsman Denis Compton died in a hospital on April 23, 1997, at Windsor at the age of 78. His notable achievements are as below. 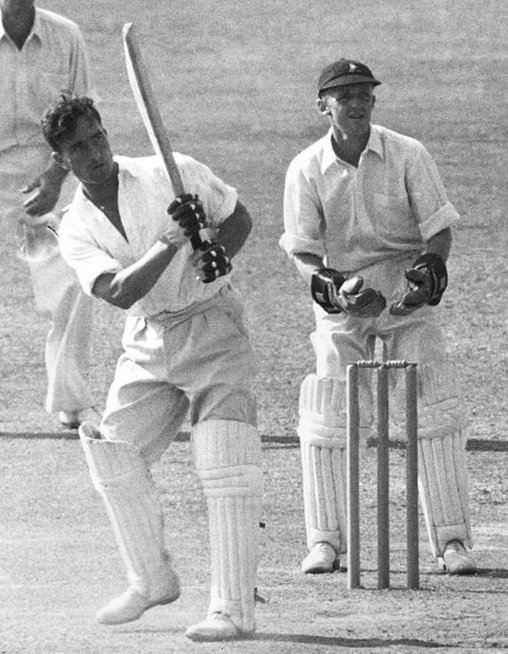 Denis Compton was a glamorous cricketer England has ever possessed. Their style captivated the crowds, last-second sweeps blending with sumptuous cover drives

Mr Devotor - January 30, 2022
1
Here are some brief details about Three Ws' of West Indies cricket as well as their complete Test career record. The Three Ws' of...