Gilbert Parkhouse was the former Glamorgan and England batsman, died at a nursing home in West Wales on August 10, 2000, at the age of 74. Parkhouse appeared in 435 first-class matches for the Welsh county and won seven Test caps for England between 1950 till 1959. 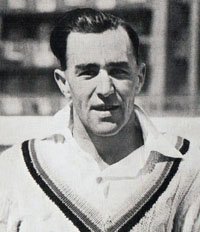 He was considered by many to have been the most graceful of homered batsmen to play for Glamorgan. And season after season he was one of the most consistent of run-scorers in the first-class game. His record for the Glamorgan of centuries in the Country Championship against every other county side is still a unique one.

Indeed, it was fitting that the Swansea-born batsman should achieve this feat in May 1960 with 121 against Leicestershire on the St. Helen’s ground in Swansea. Where he had been coached for an hour after hour in the nets by the legendary Billy Bancroft, the former Glamorgan all-rounder and Welsh rugby international.

Gilbert Parkhouse was educated at Wycliffe School in Gloucestershire. After some fine performances for the school cricket, he was even offered terms by the Gloucestershire club. However, Parkhouse had his roots firmly in South Wales, and it could not have been too difficult a decision for Gilbert to say not to the English county. He duly appeared for Glamorgan in their wartime friendlies in 1943 and, after completing his National Service, he made his first-class debut for Glamorgan in 1948.

Gilbert Parkhouse soon showed class as a middle-order batsman and scored over 1,200 runs in his debut season. Despite having a slight frame, he showed a wide range of forcing strokes. All made with immaculate timing, and following Glamorgan’s success in winning the County Championship. The English selectors took note of the talented young Welsh man.

Gilbert Parkhouse also proved to be a fine fielder in the slips and close to the bat on the leg side, although it was no surprise that Parkhouse should have such a safe pair of hands as he had also played rugby for Swansea. In the 1950 season, Parkhouse moves up the batting order to partner opener Emrys Davies, the Stalwart left-handed opener. It immediately proved to be a most productive partnership, with a stand of 241 against Somerset and 233 against Surrey.

Gilbert Parkhouse also showed that he was equally adept against the fast bowlers and the spinners and during 1950, he scored 1,742 runs. His tally included three consecutive hundreds. His excellent run of form resulted in his selection for England in the Test series against the 1950 West Indies. He also appeared in the second and third tests, and he composed an innings of 69 at Trent Bridge helped to win him a place on the England tour to Australia and New Zealand in 1950-51. Sadly, Gilbert Parkhouse struggled with poor health down under, and although he played in three Tests. He never really gave a proper account of his true abilities during the tour.

Parkhouse returned to the Welsh county and continued to be a prolific opening batsman. He was first with Emrys Davies and then later with Bernard Hedges. Indeed, his fast running between the wickets with Hedges delighted the many schoolboys who thronged into the Arms Park and St. Helen’s and Gilbert soon became their hero.

It highlighted the rich vein of batting talent with the likes of Len Hutton, Washbrook, Edrich, and Compton that the England selectors could year after year. Though they were ignoring the claims of Parkhouse, and all despite him season after season clocking up over 1,000 runs.

Indeed, it was only whilst amassing, what was at the time, a club record 2,071 runs in 1959 that Gilbert was finally recalled to the England side for the third and fourth Tests against the Indian tourists.  Yet, after a decent 78 at Headingley, and an opening partnership of 146 in the fourth Test. Gilbert Parkhouse was omitted for the fifth Test. He had the selectors shown more faith in him, one can only wonder at what he might have achieved for England.

His career record of 23,000 runs with 32 hundred proved that he had the class as a batsman to have made a huge impact at the Test level. Parkhouse continued to play for Glamorgan until 1964. When, after some niggling back injuries, he retired from county cricket.

He subsequently took up a post as a coach with Worcestershire before moving to Scotland in 1966 to act as a cricket coach at Stewart’s Melville College (SMC) in Edinburgh. He retired in 1987 and was given a Testimonial Year, during which a Glamorgan side played a match in his honor against the Scottish national side.

Len Hutton Recalls the 6 Years he Lost due to WWII

WG Grace – A Man Who Wanted to Play Cricket Forever

Kerry O’Keeffe – Expected To Be The Next Big Leg-Spinning Star...

Passion for Game – The Cricket Cult