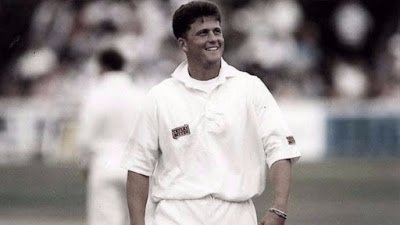 This lifeline of Darren Gough was published in “The Cricketer” in Dec 2000. Darren Gough is one of the crowd favorites, whenever he comes to the ball, the entire stadium backs him.

Please read and enjoy the thoughts of Gough when he was young and have great ambitions.
My first one-day international and my first test match, both against New Zealand in 1994. My ambition in life was to play for my country, and I felt very proud. The Sydney Test, if scoring 51 was great, taking 6 for 49 was even better. It was my first five-wicket haul in test cricket and put me on the honors board. When I got my 5th wicket I said a little prayer.
England A vs. Natal on South Africa’s A tour. Martin Bicknell broke down after two overs, which left us with just three bowlers. I ended with figures of one for 139 off 39 overs.

My wife Anna. She made me realize that to get to the top you have to work hard.

Play-Well for England in Test Cricket

One bouncer per over, two runs for a no-ball is not enough in the game compared to other sports, moreover 20 minutes is not long enough for tea.

Having to make a speech at my wedding

Going to the movies, eating out, relaxing at home with my wife

Treat others as you would as expect others to treat you.

I would win a million at a casino, retire from cricket and live a life of pleasures. And I would like to fly a jet fighter.

Rolling Peter Hartley into the bowl in a shopping trolley the innings after he had just bowled 41 overs before play along with Martyn Moxon our captain.

Mr Devotor - April 5, 2022
0
England off-spinner Jim Laker was interviewed by John Reason for The Cricketer, England in 1966. We reproduce below Jim Laker’s views on the match...